Democrat Senator Joe Manchin totally broke ranks with the progressive party to blow the whistle on the crisis caused by Imperial Leader Joe Biden and Vice-Empress Kamala Harris. It’s amazing. Everyone thought DINOs were extinct but ever since the selection, Democrats in Name Only have been crawling out of the swamp to criticize the Imperial Leader. Particularly, the one-world-government wide open borders policy endorsed by the Palace.

Liberal Senator Joe Manchin finally woke up and realized that what the New York post calls a “rapidly spiraling situation at the US border” is actually a “crisis.”

He’s still a Democrat so was extremely careful with his wording but he kept jumping up and down to blow the alarm whistle on one key point. “It’s a crisis,” Manchin told CNN, “Oh, it’s a crisis.”

Even CNN has taken notice, this time, of the horde massing to the south and planning invasion. They called it a “surge in migrants heading toward the border.”

Democrat registered Manchin didn’t quite blame the Imperial Palace for rolling out a red carpet but he came close. “Whatever message was sent — it was sure interpreted the wrong way.”

The official Democrat message sent by His Wisdom was “Trump’s gone so c’mon up man.” CNN actually admits the truth when they write, “in undoing former President Donald Trump’s border initiatives, President Biden unleashed a flood of Central American and Mexican illegal migrants at the US border, including thousands of un-escorted children.”

They can’t put the kids in cages so they’re jailing them. Everyone else gets dropped off at the nearest Greyhound station.

Biden spent his first full month in office diligently signing one Imperial Palace Decree after another. Most had Democrat buzz words in them like “amnesty” and “asylum.”

His Wisdom halted construction on the border security wall and started kneeling on the neck of Trump’s “Remain in Mexico” policy. 71,000 Central Americans claiming asylum just got approval to break camp and move north.

Another thing he couldn’t wait to sign was the order resurrecting the DREAM act which Democrat officials like to call the Deferred Action for Childhood Arrivals program.

That way illegals who were dragged across the border as children get “work permits and protection from deportation.” Of course, they deny that has anything at all to do with all the unaccompanied minors showing up at the door.

All the illegals who had to hide in church basements for the past four years can now come back out into the fields and hotels. The Democrat plan favored by the Biden regime “would create a path to citizenship for the estimated 11 million illegal immigrants in the U.S.” Conservatives call that amnesty.

Senator Manchin doesn’t like any of that, but he’s sure to tell his rabidly liberal constituents that “he would still back” the efforts. The Palace continues to deny the allegations that there is a crisis on the border. Homeland Security Secretary Alejandro Mayorkas insists that “the problems the agency faced should be blamed on the previous administration.” Just because that’s they way they do things.

ITS HAPPENING: Democrats Flipping on Biden

As most conservatives expected, Democrats only stood behind Joe Biden to remove President Trump from office. Now that…
byChris Dorsano
No comments 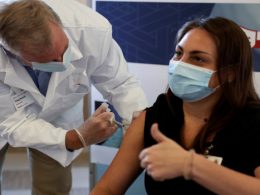