The illusion of democracy in America is finally being put out of its misery by New York City Democrats. Politicians in the city have decided that noncitizens will finally be allowed to vote openly in elections, adding hundreds of thousands of illegal votes for local Democrats overnight letting the party secure its hold in the city permanently. NYC may be just the first city to enact this official vote rigging policy, meaning that U.S. citizenship is about to become officially meaningless.

Is it bigoted to point out that the people who worked hardest to  push the noncitizen voting bill through the city council were born in other countries?

Combined with the push to eliminate the electoral college the ultimate goal of this push is very clear. Democrats can potentially secure tens of millions of votes which will permanently cement their hold on the presidency if they can complete their agenda.

The mainstream media is reporting on this new development as if it is rooted in historical trends and is simply the next step in a path which began with letting women teenagers vote.

Democrats and the media are taking advantage of the widespread ignorance in this country surrounding the meanings of citizenship, democracy, and republicanism.

They deny that citizenship is explicitly being devalued by allowing noncitizens to have all of the privileges of natural born citizens but of course it is.

Citizenship is by definition meant to be exclusive. The concept of citizenship itself, which our Founding Fathers were extremely conscious of, began in Greece and Rome.

Citizens in those days were individuals who were deeply invested in the state. They were happy to fight for it when necessary because they prospered when it prospered and suffered when it suffered.

It ought to be common sense that someone who comes from abroad and can leave at any time is not nearly as invested in a nation as someone who strongly identifies with its past and future.

The Founding Fathers intended that only citizens who were willing to show their loyalty and commitment to this country be allowed to vote for its leaders.

New York City is ensuring that people who can’t even be bothered to pursue citizenship first will be able to vote in elections without having any real stake in them.

In addition to ensuring that Democrats can permanently secure their holds on major cities this policy will inherently devalue the vote of every American citizen. 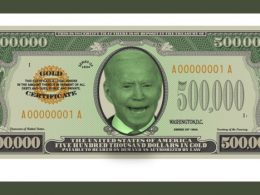 A new non-partisan report from the Congressional Research Service has shown that Joe Biden, while he is pushing…
byStaff Editor
No comments