There are few celebrities in Hollywood that seem to get it, but Mark Wahlberg is one of them.

Celebrities today seem to think they have the right to tell us how to lead our lives and what we should believe in.

They seem to think their ability to make-believe and play pretend every day makes them better than the rest of us.

Mark Wahlberg, however, does not quite see it that way.

He actually realizes that people like Robert  De Niro are actually hurting the industry by getting up on their soapboxes and slamming Americans with conservative beliefs.

After Wahlberg made “Patriots Day,” a movie about the attack during the Boston Marathon, he had a rather eye-opening message to his fellow actors and Americans.

He stated, “A lot of celebrities did, do, and shouldn’t [talk about politics].

“You know, it just goes to show you that people aren’t listening to that anyway.

“They might buy your CD or watch your movie, but you don’t put food on their table.

“You don’t pay their bills.

“A lot of Hollywood is living in a bubble.

“They’re pretty out of touch with the common person, the everyday guy out there providing for their family.

“And although I can navigate Hollywood and I love the business and the opportunities it’s afforded me, I also understand what it’s like not to have all that.”

He later added, “I definitely think the film is going to bring people together.

“It will give people an added boost and a reminder of what a great country we do have and how amazing people are.

“People really dedicated their lives to serving our country and our communities, and we need to honor that.

“The overall purpose of police and military is protect us.

“It’s an amazing thing, and every chance I get I want to thank them for their service.”

The problem with Hollywood liberals these days is that they are not even willing to have a conversation.

It is their way or the highway, period.

Thankfully, there are a few people left in Hollywood that seem to have some common sense and realize trashing and insulting the very people you rely on to watch your movies is not exactly the right way to go.

As many have said before me, if you don’t like this country, just leave. Otherwise, keep playing pretend for a living and stop insulting the very country that has enabled you to stack your bank account with millions from our hard-earned money.

The End May Be Near for Mark Zuckerberg, Here is Why

ObamaGate Ramping Up to Be the Largest Scandal in American History

ObamaGate is ramping up to be the largest scandal in American political history. On the heels of the…
byChris Dorsano
7 comments 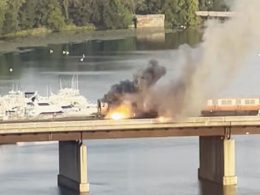 Orange Line train commuters on their way to work in Boston got an unexpected surprise Thursday morning. Murphy’s…
byStaff Editor
No comments