McCarthy Vows to REMOVE THEM ALL…

Even though he is far from a lock to win the Speaker vote, he is already making big plans.

If McCarthy gets Speaker, he has vowed to remove some of the biggest troublemakers in the Democrat Party.

Bygones will not be bygones, that is for sure.

McCarthy, if put in power, says he will remove Reps. Schiff (D-CA), Swalwell (D-CA), and Omar (D-MN) from their committee assignments.

Don’t get me wrong, I fully support removing these individuals, but I am just wondering when it will end.

Having said that, the removal of all three of these is very justified.

Schiff has blatantly lied to the American people and leaked classified information to the media to try to take out Trump.

Omar has made so many anti-Semitic and anti-American statements that it is a wonder she is even allowed to walk into the Capitol.

Swalwell was literally hooking up with a Chinese spy and had no idea he was being used.

Regarding Swalwell, McCarthy stated, “One thing I said from the very beginning, Eric Swalwell cannot get a security clearance in the public sector.

“Why would we ever give him a security clearance in the secrets to America? So I will not allow him to be on Intel.”

He then shifted to Schiff, stating, “We will not allow him to be on the Intel Committee either.”

Finally, there was Omar, with McCarthy stating, “And you — look, Congresswoman Omar, her anti-Semitic comments that have gone forward.

“We’re not going to allow her to be on Foreign Affairs.”

Schiff replied, “He will adhere to the wishes of the lowest common denominator.

“And if that lowest common denominator wants to remove people from committees…that’s what they’ll do.”

Yet, Schiff said nothing when multiple Republicans were removed from committees.

Like I said… tit for tat, but when does it end and when does Congress start acting like adults again. 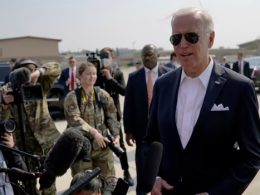 Not just most but “large majorities” of Americans, including Democrats, are “fed up” with the way Joe Biden…
byStaff Editor
No comments