President Obama is telling all in his latest interview with Atlantic Magazine. The 44th President claims Senator John McCain would bash his fellow Republicans behind closed doors. Was McCain an American hero? Or just another treasonous RINO?

President Obama just won’t go away. He reluctantly endorsed Sleepy Joe Biden for president then made a few stops on the campaign trail prior to the election. He’s got a new book to promote and he’s probably getting tired of being stuck on Martha’s Vineyard with the wife.

Now he’s gossiping to the Atlantic Magazine about the late Senator John McCain. In the interview, Obama talked about his presidency, current events and his 768-page door-stopper of a memoir coming out soon. Obama bashed the Republican Party in the interview and said he wasn’t alone with his criticisms.

He claims that behind closed doors, Senator John McCain and former Republican House Speaker John Boehner would often talk down about their own party members.

“John Boehner for example. He and I had a perfectly good relationship, but he had to act a certain way for his caucus,” Obama said. “He would badmouth many of them to me, in private. Much as John McCain did. The issue was never personal. Mitch McConnell is not buddy-buddy with anyone. I’m enjoying reading now about how Joe Biden and Mitch have been friends for a long time.”

Obama went on to claim that many prominent GOP figures such as McCain, McConnell and Boehner wanted to work with him, but they only spoke out in opposition to appease their voters.

“The issue was that they found it politically advantageous to demonize me and the Democratic Party. This was amplified by media outlets like Fox News. Their voters believed this, and over time Republicans became so successful in their demonization that it became very difficult for them to compromise, or even be seen being friendly.”

Obama didn’t condemn his own party for calling Trump supporters Nazis and Klan members for five years. Just the opposite.

He claims President Trump took advantage of racism to win his election. The Democrats are now calling for peace and unity after years of demonizing voters on the Right, censoring us on social media and murdering patriots at Trump rallies.

Radical Lefties seem to be living in some alternative universe where all 70 million Trump supporters are Nazis, so it’s perfectly acceptable to spit on us or assault us in the streets. Regardless of the election outcome, it’s clear there will be no unity anytime soon.

Katie Couric: I Gave Trump a Chance, Trump Supporters Should Do the Same for Joe Biden

Rioters Demolish City,$500,000 in Damage as New Bill Forces Police to Stand by and Watch

Texas police got a disturbing 911 call that highlights the downside of Swiss-cheese borders. The call came from…
byMark Megahan
No comments

I can't believe he said it!
byChris Dorsano
2 comments 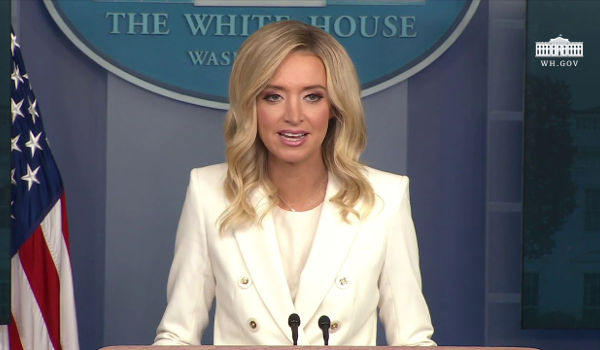