The sound of an explosion was all it took to send New York City residents into a panic. Officials soon determined a “cable failure” was what caused a manhole to blast out in iconic Times Square.

A spokesperson for Con Edison “confirmed later that the sound was a manhole explosion.” The short explanation is that the cause was “cable failure” but Manhattan residents thought the blast signaled a Russian invasion or something. Making a manhole cover fly off the ground like one of Elon Musk’s SpaceX rockets takes a lot of force.

Fire Department officials later explained that there were actually three manholes involved in the explosion, all on fire and still burning at the time of the press conference. At that point all that was known is the “fires started about 6:47 p.m.”

Huge bang in Times Square around 6:50… followed by sirens and hundreds of people running away. Not sure what it was… but a lot of people on edge! #NYC #TimesSquare pic.twitter.com/nhTtSbKe4S

That caused carbon monoxide levels to spike in the area of 229 West 43rd Street at an 18-story office building. FDNY crews scrambled to ventilate “the location’s basement and sub-basement.” By around 9:00 p.m., they had the fires out and crews started cleaning up.

Along with EarthCam footage of the crowd, Twitter is full of on the scene coverage of “people running away after the initial bang.” Thankfully, no injuries have been reported as a result of the nerve shattering explosion.

“At this time, there have been no customer outages, and no reports of injuries or property damage,” the power company verifies. “Our crews remain on location.” One witness notes, “there’s just a huge explosion. It didn’t sound extraordinarily close, but it definitely was an explosion.”

Broadway opening with a bang

Debra Messing of Will & Grace fame was celebrating the opening night of her Broadway play “Birthday Candles” but wasn’t expecting it to end with a bang. She happily posed for pictures with New York City firefighters who responded to the manhole fires that occurred just steps away.

The explosion and fires up and down the block interrupted the festivities but made sure everyone will remember the night that play opened. “This is how you make an ENTRANCE,” Playbill magazine wrote on their Instagram account.

In the production Messing plays Ernestine Ashworth, “who celebrates birthdays from 17 to 101 over the course of the evening.” She’s really excited. “Bringing this new, gorgeous play to Broadway is more thrilling than any birthday wish I could imagine.”

Con Ed administrators verified that “cable failures triggered the trouble,” adding that while there “were no injuries or outages,” two police officers “were hospitalized for ringing in their ears.”

They were in proximity when the explosion went off. Tourists and pedestrians were disappointed that the entire area had to be cordoned off for the evening.

Florida Superintendent Who Defied DeSantis on School Masks Gets Canned 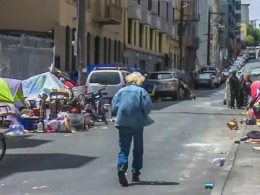 The attention of everyone around Phoenix, Arizona was grabbed, on Tuesday, by reports of an on-duty officer shot…
byStaff Editor
No comments

After 42 years of mysterious controversy, the Georgia Guidestones monument is gone. Affectionately known as “America’s Stonehenge,” the…
byMark Megahan
No comments