Guess what? It’s actually possible to “break” a crypto-coin. Imagine looking in your Ethereum wallet and seeing $5.8 million dollars that you can’t spend or trade. New isn’t always an improvement and the first thing the lawyer will tell you, when you start whining at his secretary, is the law says “let the buyer beware.”

Yuki and Art Williams are the trendy types. They like to dabble in crypto-currency for the thrill and a chance to have something to babble about at dinner parties. When they looked in their Etherium wallet, they got a lot more than a thrill. More like a heart attack.

They supposedly have 5.8 million dollars worth of Etherium but can’t get at it. What do you do when the ultra-crucial JSON file doesn’t download properly? Nobody has figured that out for sure yet. Crypto-coin traders better hope the lights don’t go out during a purchase. The couple traded 1.5 bitcoin and some Coinbase crypto to purchase “3,000 Ethereum coins in 2014 during a pre-sale offered by the Ethereum Foundation.”

The couple claims they were paying careful attention and everything when they created their password. The problem is that the crucial JSON file “which acts as a private key to open a crypto wallet” never finished downloading. “The instructions were to leave your computer on for an hour and a half and as the progression bar showed it populating the JSON file would appear. Unfortunately for us, it did not appear.”

It’s something that’s happened to all of us in the middle of something important but this time it really hurts. They got the coins and can see them but can’t open the file. Should be an easy fix and the company’s problem, right? Wrong.

Art Williams explains “the Foundation’s pre-sale website said to email the Foundation and it would send a wallet backup in an email that contained a backup JSON file.” Sounds reasonable.

They never got it. Probably because if their was one, it was long gone by the time they asked for it. As an expert in the industry, Taylor Monahan, notes, “I have never heard anyone admit straight up on or off the record at all that there is a vault or safe or something with everyone’s JSON files.”

WATCH: A family in DC can't access its cryptocurrency wallet that contains $5.8M in ethereum coins because they claim they never got a JSON file. They're asking for HELP today at 5pm ONLY on @7NewsDC Here's a sneak peek. @ethereum @VitalikButerin @AyaMiyagotchi #cryptocurrency pic.twitter.com/7ORT89UeT4

According to Joon Ian Wong, the Owner of Cryptographic Media and former Managing Director of coindesk, “This is experimental technology. Many things can go wrong. Even with the most technology-minded people. So certainly, don’t put funds at risk you can’t afford to lose.” the Williams family hired a law firm in Switzerland who confirmed that as of 2018, they were trying to “recover the JSON file.”

“In that case,” the Foundation countered, “go screw yourself.” “We continue to believe that Ethereum has no liability for lost wallets, passwords, and Private Key.” Even if they are the ones to lose your wallet. “Thanks for reaching out to the crypto-community and trying to figure things out for this fellow,” notes Mitchell Moos.

At least he’s honest enough to tell the public the truth. “So, the complication here is that unlike a traditional centralized service Ethereum might be subject to different kinds of rules when it comes to dealing with this information. They may not even have access to that information anymore.”

By the time he gets done paying all the Swiss lawyers to fight until he gets a new JSON file or an equivalent, he would have been much better off with the 250 coin haircut.

Biden Makes History, But Not the Good Kind 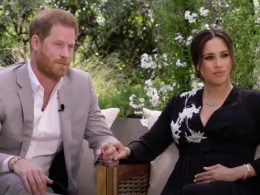 After the services for Prince Philip were over last month, the Duke of Sussex was cornered by his…
byMark Megahan
No comments

Across the United States, rioters have left carnage in their wake, which has included the defacement of historical…
byAmalia White
5 comments

Mice with genetically engineered human lungs were used, by the Chinese military, to test coronavirus strains to see…
byMark Megahan
No comments
"