Unearthed documents from his first term as Virginia governor prove that Terry McAuliffe pushed critical race theory in public schools, despite his current claims to the contrary. The scandal here isn’t so much the fact that McAuliffe promotes anti-white propaganda as it is the fact that he is now lying about having used the phrase “critical race theory” to describe this propaganda. He is lying about using these words because they have now become controversial nationwide.

McAuliffe claims that concerns about critical race theory are misplaced and meant as a distraction. He is partially right here but not for the right reason.

The unearthed documents prove that McAuliffe and his government were promoting CRT along with a slew of other leftist propaganda sources, including the far left Anti Defamation League.

McAuliffe hasn’t repudiated any of the views which he and his administration pushed on Virginia public schools; he has only disavowed use of that specific term.

Critical race theory is a distraction in the sense that it is the label which has become controversial more than the teaching themselves.

McAuliffe’s denial is one of many cases of Democrats realizing that CRT has become a toxic label which creates unnecessary headaches by inspiring parents to rebel against local school boards, as they have in Loudon County, Virginia.

They are increasingly refusing to use that controversial label, but there is no change in the substance of what McAuliffe and his cohorts are promoting in public schools.

Leftist “educators” will continue to teach white children to hate themselves and their country, they will just do so while using a title which is less politically charged.

This is why the fact that McAuliffe’s administration used the term in the past is important to the current Virginia gubernatorial race.

Democrats who previously embraced critical race theory by name should be confronted with that. They should not be allowed to weasel their way out of the issue with pedantic denials.

Parents are rightfully angry when they hear about CRT in schools. McAuliffe hopes that they will get hung up on that specific term and will  incorrectly view its disappearance as a victory.

Schools in Virginia have never stopped teaching the kind of propaganda which falls under the broad label of “critical race theory,”  they have only stopped using a sensitive term which might arouse anger.

If Republican opponent Glenn Youngkin is smart he will use these documents to prove that Democrats have been lying about the absence of CRT in schools and that these far left teachings have become inextricable from the party platform, regardless of the labels they employ.

Nancy “let them eat ice cream” Pelosi showed her hand again. The red one, dripping with the blood…
byMark Megahan
No comments 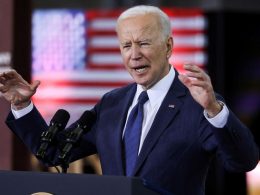 Joe Biden is digging his own political grave, one job-ready shovel at a time. He doesn’t even realize…
byMark Megahan
No comments

The war between conservative Florida Governor Ron DeSantis and the Associated Press has been escalating steadily. The governor…
byMark Megahan
No comments
"