FBI Has Been Charged: Planting Evidence

Donald Trump just set the table with an excuse just in case the FBI came up with anything at his Mar-a-Lago home.

If you have been following the story, the FBI came into his Florida home with 30 agents while Trump was out of town.

Trump had attorneys on property, but they nor his family were able to remain in any room that was being searched.

Trump warned that he would not be surprised if something had been planted.

Let’s go back in time to the Clinton administration.

When the Clintons moved out, they decided to take $190,000 in goodies from the White House.

They eventually returned $28,000 worth of goods and wrote a check for another $86,000, leaving a considerable deficit.

No charges were ever filed and the story disappeared just as soon as it came about.

More importantly, when the items were discovered missing, the FBI was NOT sent to their home to recover the items.

Trump has been cooperating after he said he mistakenly took items he thought were personal gifts, only it does not work that way.

Even a handwritten note must remain in National Archives.

After the FBI left with roughly 12 boxes of items, with no video footage of the raid and no statement by Director Wray of the Attorney General, Trump decided to let loose.

He stated, “The FBI and others from the federal government would not let anyone, including my lawyers, be anywhere near the areas that were rummaged and otherwise looked at during the raid on Mar-a-Lago.

“Everyone was asked to leave the premises, they wanted to be left alone, without any witnesses to see what they were doing, taking or, hopefully not, ‘planting.’ Why did they STRONGLY insist on having nobody watching them, everybody out?

“Obama and Clinton were never ‘raided,’ despite big disputes!”

The FBI was established more than 100 years ago.

The agency has not raided a single former president’s home, until the Biden administration.

We can only imagine what they are trying to cook up against Trump to keep him from running again in 2024.

Students Petition to FIRE Professor...You Won't Believe the Reason WHY

Be Ready For War With China in Hours Not Years

Jail Guard DID Have Relationship With Inmate

The case of an escaped Alabama killer took a bizarre twist on Wednesday, when it turned out that…
byStaff Editor
No comments

PBS Attorney Caught on HOT MIC Encouraging Violence on the WH, and MUCH MORE 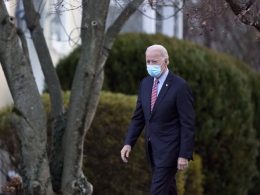 After being in office for less than a week, Joe Biden has already been caught in scandal after…
byChris Dorsano
No comments

China Bombshell That Will Piss Off Every Single Patriot

An earthshaking four-page report dated May 1, issued by the Homeland Security Intelligence Department, is guaranteed to piss…
byMark Megahan
8 comments