It would appear that Rep. Madison Cawthorn (R-N.C.) has checked out.

The controversial Republican has emptied his office both in DC and NC.

His phones are going to voicemail with a message that he can no longer help his constituents.

This is a problem.

You Still Have 2 Months!

Hawthorn is stealing money from the American people.

Even though he lost his primary, he remains in office until the new term starts in January.

Cleaning out his DC office is bad enough, but the fact he is no longer answering to his constituents is despicable.

So, for two months, he is just going to pick up a check and not earn it.

If McCarthy lets this stand, it just proves he should not have a leadership role. 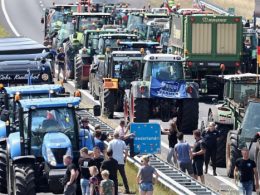 Did you ever stop to consider that eating bugs might be better than bacon? No? Well, there’s a…
byStaff Editor
No comments

Meat Shortage Was All a Big Hoax

You probably won’t be surprised to learn that America’s “biggest meat companies” lied about inevitable shortages, to “allow…
byMark Megahan
No comments

Healthcare workers in the state of Illinois who refused the Kool Aid injection won big in court. Fox…
byStaff Editor
No comments