For the last however many months, we have heard Democrats rail during their opening arguments in the Senate trial.

Adam Schiff has managed to put the country asleep for hours at a time, all the while failing to make the case for impeachment.

It’s Just Not a Strong Case

MSNBC’s Ari Melber has consistently railed against the Trump administration while serving as an anchor for the left-oriented mainstream media outlet.

While Melber stated he thought the Dems did a good job on abuse of power, he did not agree that they have made their case when it comes to obstruction.

He stated, “As we are now here… I do not see an overwhelming case and overwhelming evidence by these Democrats to support convicting on obstructing Congress.”

Melber then added, “So is there enough evidence to support the immediate removal of a president – three months and you’re gone as a precedent?

“I haven’t seen them land that.”

There is good reason for that view… because Trump never obstructed Congress.

The fact of the matter is that the claim by Democrats that Trump obstructed Congress was premature at best.

Every witness and every document that has not been provided to Congress is in one way or another locked up in court cases.

Democrats could have allowed these cases to play out, as the Trump administration has turned over every document required when cases have been exhausted and the ruling went against the administration.

Democrats, however, chose to take the tack that this impeachment was of the utmost urgency, so they needed to proceed immediately.

In the process, however, they circumvented the law and rushed to judgment.

As has been stated numerous times, if you want to throw an accusation around about abuse of power, it is the Democrats that are guilty of this.

At no point, have they honored executive privilege and now they are ignoring our legal process to remove Trump from office in their effort to regain power in Washington, D.C.

Honestly, the wrong person is on trial here, as it should be Schiff, Pelosi, and Nadler answering for their crimes, not Donald J. Trump.

CNN host Fareed Zakaria just struck fear into the heart of Democrats everywhere. On a recent show, he…
byRyan Michael
No comments 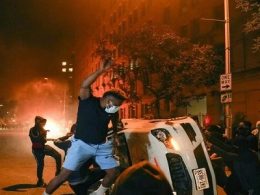 Buttigieg Goes on the Attack Against Biden

Pete Buttigieg just found his big boy pants and after he put them on, he took a major…
byChris Dorsano
No comments
"