The “Holding Rioters Accountable Act” sponsored by Georgia Senator Kelly Loeffler and her Arkansas colleague, Tom Cotton, along with other Republican supporters, is designed to “stand up” to the Black Lives Matter violence in Democrat-run cities.

Our cities are being destroyed & in so many cases, groups like BLM and Antifa are to blame.

I’ve stood against these radical groups and together, @TomCottonAR and I have introduced the Holding Rioters Accountable Act. We must restore law and order in our country. pic.twitter.com/UrvuhKh9cN

Holding the rioters accountable for their violence

Loeffler’s fellow Republicans “stood up” to the Black Lives Matter anarchists who recently disrupted a campaign event by insisting on law and order. The bill she sponsored with Senator Tom Cotton of Arkansas says it all in the title. They call it the “Holding Rioters Accountable Act.” Most Americans, even the moderate liberals, are fed up with the out of control mob violence. It’s been going on night after night for more than the past three months.

Loeffler’s phone rings off the hook and she’s fighting hard for the citizens she represents. “The most important thing is that we have law and order in this country.” We simply have to hold the domestic terrorists responsible for their actions or what we really have is “anarchy.” As she told the Fox host about one of her recent rallies, “Black Lives Matter rioters came in and they were protesting and trying to break it up, but we didn’t stop because, look, this is one thing that our country is built on.”

The event was held in a public park. Police were all over the place but “refused to intervene.” Conservative supporters were chanting Loeffler’s name and “USA,” while the Nihilist children of darkness were bent on disruption. The obvious difference in political opinions between the law and order demanding conservatives and the Antifa-linked rioters highlights what Loeffler called the “stark contrast” voters have in November, “giving them a clear choice between order and chaos.”

My Holding Rioters Accountable Act will make sure ALL criminal activity is prosecuted by empowering the DOJ to withhold funds from biased jurisdictions that refuse to take action.

It’s time to stop turning a blind eye to violence and start protecting our communities. pic.twitter.com/fkNrya8JGP

The rule of law, safety, and security

What Ms. Loeffler said resonates with a lot of people, especially the ones in the heartland of America where liberal antics don’t often intrude. “Do they want the opportunity to have free expression, to have the rule of law, safety, and security in their communities?” Most Americans say yes and they plan to Re-elect President Donald Trump in a landslide to accomplish it. Conservatives won’t let anarchist rioters burn their cities to the ground because you defend the things you love.

Stomping out the rioters is Kelly Loeffler’s top priority. “This is the type of legislation I have been introducing to help the president to make sure that we have a strong, safe economy.” The alternate is what the New World Order globalists running the Deep State will direct Joe Biden into rubber stamping. The choice is real enforcement of the laws, “or do we have the chaos and pandemonium that they want to create just to consolidate power in the radical left?”

If republicans prevail in congress, Loeffler and Cotton’s bill “would hold rioters and district attorneys accountable for their actions, including when they don’t prosecute rioters and looters.” It’s amazing that we have to have a separate law to instruct lawyers to follow the laws they already swore to uphold. These days, laws don’t seem to apply to Black Lives Matter rioters. “Dozens and dozens have been released without being held accountable for burning down businesses, many minority-owned businesses, destroying jobs, livelihoods.” 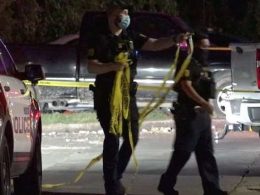 A gunmen shot four people, killing three of them in southwest Houston. Two of the victims killed in…
byRyan Michael
No comments

A manhunt in LaSalle County, Illinois has been called off with a suspect in custody. Law enforcement spent…
byMark Megahan
No comments