byChris Dorsano
Compound bow taken by the police in Marietta.

A man armed with a bow and arrow carjacked a woman in Atlanta, and was eventually stopped when he crashed the car and was shot by the police.

At approximately 6:15 a.m. on September 28th, a security guard at the Savannah College of Art and Design in Atlanta, Georgia, said that the man tried to carjack him.

Instead, the carjacker moved on to another target.

Atlanta police report that Trent Andrew Emory, 29, fired his compound bow into a woman’s windshield and forced her to get out of her car. He also threw a fire extinguisher at the woman, though she was not hurt.

The police were called to the scene at 6:53 a.m., where the woman reported that her 2014 Toyota Camry had been stolen. At around the same time, officers were responding to a car crash in nearby Marietta, near the intersection of Atlanta Road and South Marietta Parkway, where they encountered the carjacker.

Upon seeing the police, Emory pulled out his compound bow and aimed an arrow at the officers. Police gave multiple verbal commands for him to drop the weapon, but he refused. Emory was then shot by at least one officer.

“The incident itself took roughly 20 minutes before we were able to get him in custody. We were negotiating with him actively outside of the vehicle,” said Chuck McPhilamy with the Marietta Police Department.

The carjacker was then transported to Wellstar Kennestone Hospital, where he was reportedly in stable condition.

The car that Emory crashed was the 2014 Camry belonging to the carjacking victim.

According to police, Emory had attempted at least two carjackings with his compound bow prior to successfully stealing the Camry.

On Monday, the bomb squad detonated an improvised explosive device at the federal courthouse in Bluefield. The building…
byStaff Editor
No comments

While innocent Trump supporters are locked up and tortured by the federal government and the Biden Administration, Black…
byChris Dorsano
No comments

The Footage Was Released… They SHOT HIM 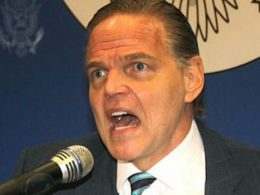 After only two months on the job, Joe Biden’s special envoy to Haiti threw up his hands in…
byMark Megahan
No comments