Biden Admits to Our Troops During Another Botched Speech

Joe Biden admitted what we’ve all known for a while in another botched speech. While speaking to members of the U.S. Air Force and their families at the Royal Air Force Station in England, the former vice president admitted he has issues with his memory.

Conservatives have long known that Biden has severe cognitive issues, but the left has always insisted that he’s fine. Apparently, the former vice president knows the truth.

For most of his speech, Biden fumbled over his words, struggling to make sense. Though the left continues to claim that Biden has no cognitive issues, instead referring to his speech problems as a “stutter,” anyone who watches him speak more than a few sentences notices that something is off.

“When I was 14, if you would, please at ease,” he mumbled at the start of his speech. “I keep forgetting I’m President.”

Videos of the speech began to go viral, with conservatives calling Biden out for his obvious problem.

Supporters of former President Trump responded to the video by saying that they would like to also forget.

Ryan Fournier, the founder of Students for Trump, responded to the video, writing: “Biden may have forgotten he’s President, but anyone who’s gone to fill up their car with gas since he was elected won’t forget who’s responsible.”

Biden may have forgotten he's President, but anyone who's gone to fill up their car with gas since he was elected won't forget who's responsible. https://t.co/g8DuCZr2fO

Author and podcast host Dinesh D’Souza tweeted: “Joe Biden forgets that he’s the leader of the free world. Somehow I don’t think Xi Jinping ever forgets who he is.”

Joe Biden forgets that he’s the leader of the free world. Somehow I don't think Xi Jinping ever forgets who he is.https://t.co/K0yPu7XEFW

Biden’s obvious cognitive decline has made us the laughingstock of the world, but no one will come out and admit it. The left doesn’t care as long as the big bad ‘Orange Man’ is out of office, and they are happy to have a president that they can so easily manipulate. While on the campaign trail, they kept him out of sight to prevent sane Democrat voters from seeing who they were really voting for, but now that he’s in the White House they have no choice but to let him embarrass himself in botched speeches like this.

White House Announces They are Coming For You 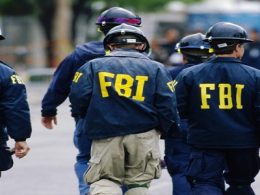 Passengers flying into Miami International Airport Tuesday evening, from Santo Domingo in the Dominican Republic, have some serious…
byMark Megahan
No comments

The Pentagon is on high alert after a shooting took place just steps away from the facility, near…
byChris Dorsano
No comments