Xi Jinping is getting so desperate to see some compliance with his Covid rules, he started dragging citizens through the streets as a chilling message to others not to disobey his orders.

Official Communist Chinese state media outlets in Beijing are reporting that “armed riot police” in the southern part of China “have paraded four alleged violators of Covid-19 rules through the streets.”

Human rights groups are shocked at the “heavy-handed approach,” because the regime banned “public shaming” of dissidents way back in 2010.

Clearly “the practice has resurfaced,” since Pooh Bear melted down over lax enforcement of his “national zero-Covid policy.”

According to state-run Guangxi News, the four suspects were not just masked, they were encased in full body Hazmat suits and they held “placards displaying their photos and names.”

The criminals were forcibly dragged through the streets on parade Tuesday, December 28, which attracted a “large crowd” in Jingxi city, part of the Guangxi region.

The whole idea was to tell everyone along the nearby border not to get any bright ideas. Covid rules closed the border so now China has an illegal alien problem.

Event photos clearly confirm each suspect was “held by two police officers – wearing face shields, masks and Hazmat suits.” They were also “surrounded by a circle of police in riot gear, some holding guns.” The alleged crime is the transport of “illegal migrants.” They might be infected with Covid. Funny how nobody in America can seem to make that connection.

Because of the [Nu-Xi-] Omicron variant, “China’s borders remain largely closed.” That induces people in Vietnam, across the shared border, to break the rules.

In August, the government announced new disciplinary measures to be used against those breaking Covid health rules which brought back the abandoned practice of public ridicule.

The Chinese equivalent of tar and feathers was meant to provide “a real-life warning to the public.” Conservatives would love to see something similar done to the coyotes who smuggle aliens into America.

Surprisingly, official outlets joined with social media users to criticize the display. Nobody wants Covid to cancel the Olympics. That’s why they acknowledge that Jingxi is “under tremendous pressure” to prevent imported coronavirus cases.

Even so, “the measure seriously violates the spirit of the rule of law and cannot be allowed to happen again,” Beijing News dared to print on Wednesday. The editor will probably be dragged through the streets himself on Thursday. 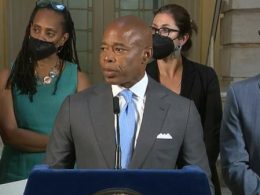 New York City’s controversial new Mayor, Eric Adams, has a bold plan to cope with the overflow of…
byMark Megahan
No comments

Remember that little “insurance policy” that Peter Strzok took out, in a conspiracy with his illicit lover Lisa…
byMark Megahan
No comments

The voters have spoken and they demand law and order. Imperial Leader Joseph Robinette Biden Jr. took to…
byMark Megahan
No comments