Way back before Joe Biden was signing $1.5 trillion spending packages, Senator Ted Cruz was trying to get a much smaller piece of legislation passed.

That would end up getting folded into Joe Biden’s omnibus legislation.

In turn, Joe Biden voted against the bill.

So, the White House ripped him when he started taking victory laps over the Ports-to-Plains Corridor portion of the bill.

As soon as Cruz called it a “bipartisan victory,” the White House was chomping at the bit to call him out.

It did, but Ted Cruz was able to explain just how this all went down…

And we asked him why. Here's his response. pic.twitter.com/3OImvbskz3

Unfortunately, this tactic is often used to make one side of the aisle look bad.

Remember when Democrats added funding for police to another big spending bill?

When Republicans voted against that, all Democrats would say was that the GOP was not supporting police.

They failed to mention that there were hundreds of billions of wasted money going to their pet projects in the same legislation, which is why the GOP fought it.

It is all just political theater to make the other side look bad. 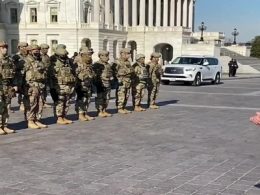