It began as a cocaine investigation and it was supposed to be a takedown, but it turned into a shootout on Friday with police. Horvin McKenzie is now behind bars and according to a federal criminal complaint, Drug Enforcement Agency (DEA) special agents had been focused on him for a few weeks.

It goes on to say that McKenzie met with two of the agency’s confidential informants about a drug deal on April 6. On April 18, he told them he would meet them in a few days at the Bass Pro Shops in Dania Beach to conduct the drug deal.

On Friday, McKenzie and David Jonathan Ventura allegedly showed up with two kilos of cocaine in exchange for $64,000. Agents and detectives were waiting and boxed in the suspects’ cars with their own vehicles.

That’s when they say Ventura shot at them injuring a Plantation detective assigned to BSO’s Drug Task Force in the arm. Officers returned fire and shot Ventura. Local 10 News cameras caught the suspect getting wheeled into the hospital.

Both Ventura and the Plantation detective sustained non-life threatening injuries. McKenzie is expected to appear in federal court Monday.

The suspect, who is black, survived the shooting, which means Florida will be spared from potential BLM riots which have been raging throughout the country.

Florida Governor Ron DeSantis signed his long-promised anti-rioting legislation into law on Monday during a news briefing in Polk County. DeSantis first announced his plan in September alongside Polk County Sheriff Grady Judd and he returned to the county for its signing.

“We put out a vision for the state to maintain being a law and order state,” DeSantis said. “We saw really unprecedented disorder and rioting throughout the summer of 2020, and we said that’s not going to happen here in the state of Florida.”

The governor touted the scope of the newly signed law.

“It is the strongest anti-rioting pro-law enforcement piece of legislation in the country. There’s just nothing even close.”

The law penalizes local governments who would look to defund their police departments and makes them liable for damage if elected leaders “tell law enforcement to stand down,” according to the governor.

It also applies more penalties to people who block highways during protests or topple monuments in the state. There is also a provision for “mob intimidation.”

“We saw images of people just sitting outside eating at a restaurant, then you have this crazy mob circle around them and start screaming and really intimidating. I’m sorry that’s unacceptable. You’re going to be held accountable,” DeSantis said.

The governor also highlighted heightened penalties for any violent clashes with law enforcement during protests or demonstrations.

“If you harm others, particularly if you harm, a law enforcement officer during one of these violent assemblies, you’re going to jail,” DeSantis said.

“I’ll guarantee you that YOU’LL be able to tell the difference…if you come here and riot.” pic.twitter.com/9TUttrSWUy

The Democratic Party was and still is the party of slavery and racism. This time around, Democrats blast…
byAmalia White
No comments 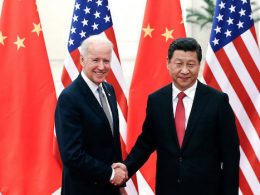 Now that Trump is out of the way, CNN and other Left-wing propaganda networks have a new target…
byRyan Michael
No comments