Joe Biden is digging his own political grave, one job-ready shovel at a time. He doesn’t even realize he admitted on TV that Donald Trump had the right idea on Afghanistan. Between heavy handed vaccine mandates combined with general incompetence and possible dementia, he’s swirling around in a circle and about to get sucked down the drain of history. Kamala Harris looks on from the sidelines and smiles.

Stumbling and bumbling Joe Biden isn’t doing his political image any favors lately. Between a whole slew of really unpopular decisions, a lack of leadership and guidance here at home, and general signs of declining mental health, Kamala Harris is hoping for a promotion in the near future.

As Joe babbled to the press about his failure in Afghanistan he didn’t even notice that he admitted Donald Trump was right and he was wrong.

There is only one reason, the bumbler-in-chief concedes, “why no American was attacked” from February 2020 until Aug. 26, 2021, when ISIS-K struck.” That reason is the deal Donald Trump made with the Taliban. His Wisdom blew every decision he had control over.

Trump put America first. Our new Imperial Leader plays second fiddle to everyone. One writer notes “every move major Biden has made in office has weakened the United States, both domestically and abroad.”

Another part of that disturbing pattern is each of those bad decisions “hurt the U.S. and helped our adversaries, including China and Russia.”

That’s not even considering all the billions worth of equipment which Biden handed over to the Taliban without a fuss. The liberals still insist he’s really not “some sort of Manchurian president wanting to undermine our country.”

Instead of making or, God forbid, following laws, Joe Biden makes up the rules as he goes along. Ever since day one on the throne he’s been getting writer’s cramp from all the executive orders he signs into action.

Palace orders for this and Imperial decrees for that. Each and every one seemingly calculated to do maximum damaged to everything his predecessor put together.

He hurt America by killing the Keystone XL pipeline and putting an end to oil exploration on federal lands “just as the U.S. had reached energy independence.” At the same time he turned around and helped the Kremlin.

Between the invasion of illegal immigrants through our non-existent southern border and heavy handed vaccine mandates, revolution is right around the bend. That’s what happens when liberal officials accept critical race theory and try to force diversity training on the military. Joe Biden thinks America itself is fundamentally racist.

The last straw could be the mandate for every company with more than 100 workers to require vaccination compliance. Cops, firefighters, doctors and first responders are about to be terminated in droves. Antifa anarchists will be glad to fill the power vacuum.

Trump’s Hand Written Letter Sends Them Over the Edge

You know things are going bad for the Deep State when Democrats stop drinking the Kool-Aid. Panicked Capitol…
byMark Megahan
No comments

A police chase has turned into a manhunt for two suspects, and the lockdown of three Lexington County…
byChris Dorsano
No comments 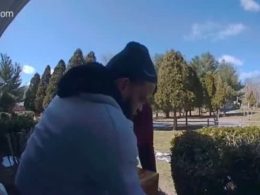