Just like most Democrats, there is ample evidence that Kamala Harris promoted violence during the riots. New information shows just how devastating her actions were.

Kamala Harris promoted the Minnesota Freedom Fund over the summer, which was a bail fund for violent rioters who destroyed our nation’s cities. By bailing them out of jail, she allowed them to be back on the streets, committing more violent acts.

“If you’re able to, chip in now to the [Minnesota Freedom Fund] to help post bail for those protesting on the ground in Minnesota,” Harris tweeted.

If you’re able to, chip in now to the @MNFreedomFund to help post bail for those protesting on the ground in Minnesota. https://t.co/t8LXowKIbw

Soon after her promotion, it was discovered that the Minnesota Freedom Fund helped release a child sex abuser and other horrific criminals back onto the streets.

Now, the fund is refusing to release records of the other individuals that it helped release back into society.

According to Just The News, the bail fund promoted by Kamala Harris “reportedly helped bail out several accused and convicted criminals — at least one with a markedly violent history — is refusing to share the records of the individuals it helped spring from jail in the midst of last year’s deadly Black Lives Matter-led riots in Minnesota.”

This organization helped release at least one individual with several rape convictions on his record, as well as another criminal that had allegedly shot at police officers during the Minnesota riots.

Local Fox affiliate KMSP also found that among those who received bail money from the MFF were “a woman accused of killing a friend [and] a twice convicted sex offender.”

Zerohedge also revealed a list of offenders bailed out by the MFF:

It is appalling that Harris is willing to associate herself with this organization, and has led to calls from many conservatives for her impeachment.

Conservative commentator Jack Posobiec tweeted, “Impeach Kamala Harris,” in response to the news that the organization would not share its records.

Matt Gaetz is right. For months Democrats encouraged and defended BLM and Antifa violence. Hell, Kamala Harris tweeted out for donations to a bail fund for rioters.
Thousands of small businesses destroyed, looted, and burned down — Democrats didn’t care.pic.twitter.com/BBepHvZzDP 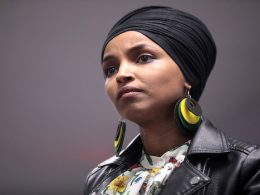 On Easter, a video of Christians singing while on an airplane made its way through Twitter. The site…
byAmalia White
No comments

The estate of murdered Trump supporter Aaron “Jay” Danielson is suing the Democrat stronghold of Portland, Oregon over…
byMark Megahan
No comments