He does not seem to have the ability to walk and chew gum at the same time.

He did, however, seem to realize he was walking down the wrong path, and tried to correct himself.

When Santos won, it was considered a huge win for the GOP.

He is not only the first openly gay Republican House member, but he flipped a blue seat red in New York.

His mistake is that he just wants to walk away from the investigations the GOP wants to run.

He stated, “If parts of our party want to go into these investigations, that’s their prerogative.

“I don’t want to waste my time in Washington engaging in hyper-partisan issues.

“I want to come here to deliver results.”

I love that he wants to work on improving Americans’ lives, but he will have to be able to multitask here.

This is not about getting revenge for Donald Trump.

It is about bringing Joe Biden and Democrats to justice to make them pay for their corruption.

Santos was asked if he thought the investigations were just a waste of time, which is when he backtracked a little.

He stated, “I think that for at least the first six months, we should work on making this county energy independent, we should work on reducing crime across metropolitan areas, such as New York City, and then we can start talking about investigations.”

How about you just do both?

You are being paid a six-figure salary, so don’t be afraid to put in a little extra work, Mr. Santos.

First Trump Challenger Announced... Is This a Joke? 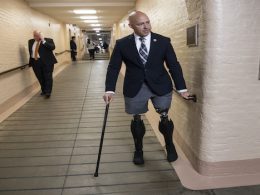 Dr. Anthony Fauci is gone. We will never have to see the man at White House briefings again.…
byStaff Editor
No comments

Project Veritas, a non-profit organization known for its exposés and undercover journalism, has just released a video from…
byChris Dorsano
No comments

Every nook and cranny of California warehouse space, from the coast all the way to the Arizona border,…
byStaff Editor
No comments