Obama Slithers Out from Under His Rock, Then Trump Goes Nuclear on Him

Trump really let him have it!

Well, we have wondered how Democrats were going to try to fight back against the economy, and now we know.

Since their attacks and efforts to convince Americans the economy is not working for them have failed, now Dems are saying this economy was actually created by Barack Obama.

One of the funniest things I saw recently was Tom Steyer trying to explain the economy.

When he was told that recent polls showed 70 percent of Americans felt this economy was working for them, he more or less said everyone was stupid.

When the reporter stayed on him about it, he just held the microphone, dumbfounded.

Since they cannot get Americans to buy into the idea that the economy is not working for them, it now appears that they are calling on Barack Obama to take claim for it.

The former president has been more than happy to oblige them…

Eleven years ago today, near the bottom of the worst recession in generations, I signed the Recovery Act, paving the way for more than a decade of economic growth and the longest streak of job creation in American history. pic.twitter.com/BmdXrxUAUf

Needless to say, the Trump campaign was not going to sit idly by and allow Barack Hussein Obama to steal his thunder.

“By contrast, though, deregulating, lowering taxes, and supporting free-market policies, President Trump has created the hottest economy on record, with unemployment hitting generational lows and all-time lows for African Americans, Hispanics, the disabled, veterans and many other hard-working Americans.

“Paychecks are growing at the fastest pace in a decade and twice as fast for low- and middle-income Americans.

“It’s no wonder Democrats seek to take credit for the Trump economy after eight years of betraying blue-collar workers and inflicting pain upon the middle class as Americans everywhere suffered.

“But the failed days of Democrat stagnation are over, and the soaring Trump economy is here to stay.”

….ever. Had to rebuild our military, which was totally depleted. Fed Rate UP, taxes and regulations WAY DOWN. If Dems won in 2016, the USA would be in big economic (Depression?) & military trouble right now. THE BEST IS YET TO COME. KEEP AMERICA GREAT!

All Obama did was dig this country into a hole that we are still trying to dig ourselves out of.

The tax break that Trump and the Republicans issued is what is widely credited with the growth of the economy and job market, not to mention the wage growth it has encouraged.

This is what Democrats do, though… they attack, attack, attack, then when nobody buys their blatant lies, they try to take credit for something they had absolutely nothing to do with.

So, the next time you see Joe Biden and he says this economy is only working for the top one percent, ask him about his best bud’s tweet.

[Video] Bloomberg Comes Up With a Big NOTHING Burger 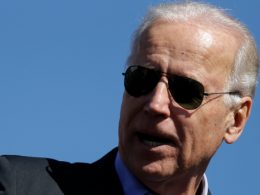 CNN’s Jim Acosta shared a video on Twitter of a crowd at a Trump rally he was covering,…
byAnastasia Boushee
No comments
"