The job of our local police officers is to protect and serve but sadly, one Portland police officer decided that was far too risky of a venture to undertake.

The unwritten rule used to be that journalists are not attacked, period.

This new breed of liberal, however, does not believe in that and journalists reporting for any outlet deemed to be conservative are targets.

During yet another ANTIFA protest in Oregon, it was ANTIFA’s masked members that provided far more benefits from the local police than an innocent citizen just trying to do his job.

The video is troublesome and should result in the immediate dismissal of this police officer.

It starts out with a friendly exchange from across the street.

The videographer clearly knows one of the ANTIFA members, but suddenly a group of them start to run across the street with pepper spray.

The videographer quickly retreats to an area where there is a police officer nearby.

Rather than find out what happened or to offer protection for the young man, the officer tells him, “We’re not going to come out and save you.”

For some reason, Portland has become a safe haven for ANTIFA.

The city’s police continue to let these domestic terrorists wear masks, carry weapons, and assault anyone they choose without repercussion.

In the real world, the ANTIFA member that had the pepper spray would have been locked up and taken into custody.

Instead, the officer chose to berate the reporter.

Both the mayor of the city and the Portland PD must be held accountable for this and it is up to us to ensure all of America learns about it because you know mainstream media will completely ignore the story and continue to protect this radical-leftist-terror organization.

Uber Pledges to be an ‘Anti-Racist Company’, Then Pulls a Racist Stunt

Many companies have been under media scrutiny after using Black Lives Matter on their social media pages. "…
byChris Dorsano
One comment

On Monday, Dr. Rochelle Walensky, the Director of the Centers for Disease Control and Prevention (CDC), stated that…
byRyan Michael
No comments 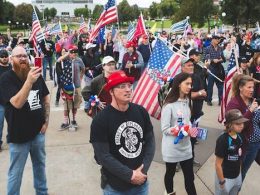 The mainstream media has always held that one of their most important rules is to “never punch down”.…
byMatthew Holloway
No comments
"