Members of an organized criminal group in the Netherlands have been arrested after two of their number unintentionally blew themselves up while producing a series of step-by-step tutorials on how to blow up ATMs. The gang appears to have been running a sort of training course which taught criminals to rob cash machines using explosives. Their activities have been linked to a spike in ATM attacks in Germany and the Netherlands.

A joint 18-month investigation by German and Dutch authorities ultimately rounded up nine suspects who are accused of specializing in this variety of robbery.

Authorities are concerned about explosive attacks on ATMs not only because of the thefts themselves but also because innocent bystanders may be harmed in the process.

This is clearly a valid concern because the alleged experts managed to blow themselves up in one of their own tutorial videos in 2020.

One suspect died and another was severely injured when this demonstration at the group’s clandestine “training center” in Utrecht.

The explosion launched the  cross-border investigation, which quickly discovered that the men had been ordering different varieties of ATMs for testing.

They filmed themselves using homemade explosives as they sought to find the most efficient methods of breaking into the machines and extracting cash. 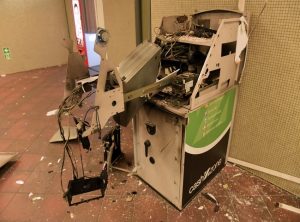 ATM robberies are increasingly common in Europe, a rise which authorities link in part to the group which was the target of the recent investigation.

These individuals are believed to have caused losses in excess of two million Euros in Germany, where most of the thefts took place. Most of the criminals themselves are Dutch.

This is believed to be a result of strengthening security measures in the Netherlands which are making ATM attacks more difficult.

The frequency of these crimes in Germany rose rapidly in 2020, with a total of 414 ATMs blown up in the manner being taught by the Dutch group.

German and Dutch authorities expressed great satisfaction in the results of the investigation and the effectiveness of their cooperation.

They hope that the mass arrest of some of the most active ATM bombers will be a major blow which might reverse the rising popularity of the crime.

Election Ops Were Shredding Voter Applications... It's Time for the DOJ to Drop the Hammer

RESULTS: AG Barr Makes YUGE Announcement Proving He and His Team are Busting A**

On Wednesday, Attorney General William Barr made what President Donald Trump would call a “YUGE” announcement. Since July,…
byMark Megahan
No comments

The overall state of the nation continues to deteriorate under the occupation of the Democrat-Socialist Biden-Harris regime. As…
byChris Dorsano
No comments
"