Situation Normal: All Bidened Up

Over at the Washington Examiner, they graded Joe Biden’s performance. Needless to say, it wasn’t glowing. The best way to sum up the current state of disunion, they write, is “situation normal, all Bidened up.”

His other big accomplishment is the worst approval rating numbers yet. It’s the normal situation that staffers are forced to compensate for.

On Friday, the latest economy report verifies that inflation spiked “unexpectedly high” to 8.6%. Like the weather report lists the temp, then adds that it “feels like” something different, “many people feel it is much higher since they are paying about 50% more for gas and 20% more for food.” As Biden tried to blame Putin and his invasion of Ukraine, nobody believed him.

The real cause of the gas shortage is lack of refineries. We don’t have those because of his crippling climate policies. When Joe’s best hope for the week, gun control talks, looked like accomplishments will get watered down to nothing, conservative pundit Jed Babbin quipped “‘SNABU‘ — Situation Normal, All Bidened up.”

Biden’s grade “F” week confirmed “just how far the Biden regime is willing to go to push its transgender agenda on an unwilling public.” The situation is so far out of control that the palace actually threatened to hold back the lunch money grants, unless schools “adopt government-certified policies” on “discrimination on gender identity.”

Conservatives call that “depriving children of food to bully parents and schools into something they strongly, and rightfully, reject.”

Nobody important bothered to show up in Los Angeles for Biden’s big Summit of the Americas. The whole thing flopped on it’s face and all Biden accomplished was commitments to spend a whole lot more cash in Latin America, while speeding up the flow of migrants through the wide-open border crossings.

While Americans can’t even drive to work because gas is up over $5 a gallon, the migrants are on the march northward. The normal “caravan” situation of migrants in massive numbers is headed here now. More than 10,000 of them. Biden assures they will be “admitted quickly when they get here.”

Another normal situation is hitting the panic button and slapping up security fences at the drop of a controversial sound bite. Democrats can’t figure out which side of the controversy they are supposed to be on when it is the liberal abortion backers who are expected to get the most violent.

On Tuesday, the Ministry of Domestic Security issued a terror alert bulletin “warning that the expected Supreme Court decision overruling Roe v. Wade, coupled with anger about Biden’s open borders, would lead to mass violence.” Americans aren’t sure if that was meant to be a warning or a threat to SCOTUS to rethink their decision.

Another situation which is normal for Biden is the way the palace propaganda department sidestepped the whole attempted assassination of Justice Brett Kavanaugh. The U.S. Marshals, fortunately, thwarted the hit. Meanwhile Pelosi is fighting hard to keep justices from getting increased security. Biden’s week only got worse as it progressed.

The Examiner notes, “If anyone on Team Biden noticed Mexican President Andres Manuel Lopez Obrador’s threat to interfere in the 2022 elections if people spoke disrespectfully about Mexicans, it went unreported. That is precisely the type of threat a president should respond to forcefully, but from Biden, there was no word. Like the late Donald Rumsfeld was fond of saying, weakness is provocative.“

Buttigieg Blows it For Passengers By Angering the Airlines 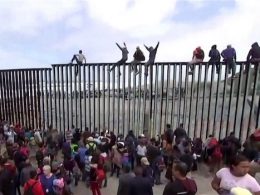 The Biden administration is setting up two more emergency intake sites that combined will provide more than 5,000…
byChris Dorsano
No comments

MSMs Attempt to Justify the Murdering of Thousands of Americans

One progressive pundit devoted a full 3,400 words in an attempt to justify the murder of Americans by…
byMark Megahan
No comments