The Harris-Biden regime (or Biden-Harris, which is it again?) is now fully disconnected from reality. They are denying yet another crisis as Americans in the South East wrap around gas stations only to find pumps dry and prices skyrocketing. All while they claim “Right now, there is not a supply shortage.” in a White House Press Conference.

“Right now, there is not a supply shortage. We are preparing for multiple possible contingencies because that’s our job, especially on the Homeland Security team, and considering what additional steps may be useful to mitigate any potential disruptions to supply.”

“As I indicated, right now there are no supply disruptions. And the Department of Energy’s Information Agency — the “EIA” — is doing the analysis right now about potential supply disruptions and what price effects that could have. And we’re working with other agencies to consider how, if necessary, we can move supplies to a place where it might be needed if it turns out that there is a shortfall. “

In spite of an overwhelming number of reports that gas-stations are running out of fuel up and down the east-coast, why is the Biden White House denying something that is so indisputably true?

The Colonial Pipeline Shutdown: What We Know

The White House Press Conference wasn’t a total loss though, Homeland Security adviser Sherwood-Randall at least laid out a timeline for us. Here’s what we know.

The America-First wing of the Republican party has reacted with appropriate scorn for the obtuse non-reaction of the Biden White House. At the forefront, Congresswoman Lauren Boebert (R-CO) pointed out the Central Intelligence Agency’s recent virtue signaling “Woke” recruiting campaign. She suggests that were the agency’s resources better spent, a cyberattack like Friday’s could be avoided.

Perhaps if the CIA was focused more on actual threats to our country’s infrastructure instead of making videos about intersectional feminism we wouldn’t have a gas shortage due to hackers right now.

OANN’s Jack Posobiec lamented the lack of a response from the White House and a their failure to truly inform the American people.

The biggest pipeline in America was shut down by hackers and the White House hasn't explained one thing about how this happened pic.twitter.com/iD6qSMHHWm

Deputy National Security Adviser for Cyber & Emerging Technologies Anne Neuberger did reveal that the hack was perpetrated by the ‘Darkside’ hacker group, however, they left out the glaring sub-text: that means Russia. NBC reported, “The FBI confirmed Monday that the culprit is a strain of ransomware called DarkSide, believed to be operated by a Russian cybercrime gang referred to by the same name. ” However, the White House has been silent on the Russian connection.

An alleged statement from the Darkside group was released via the dark-web which claimed an apolitical nature motivated by only money,

“We are apolitical, we do not participate in geopolitics, do not need to tie us with a defined government and look for other our motives,” the gang posted, misspelling “government.”

“Our goal is to make money, and not creating problems for society. From today we introduce moderation and check each company that our partners want to encrypt to avoid social consequences in the future.”

There’s No Denying It Because Russian Security Is Very Effective.

The FSB (The Federal Security Service of the Russian Federation) and the GRU (The Main Directorate of the General Staff of the Armed Forces of the Russian Federation,) which are roughly equivalent to our FBI and CIA/NSA respectively are not only fully appraised of cybercrime activity originating from Russia, but they are demonstrably involved in much of it. (Ex. ArsTechnica, Politico, NY Times).

There is NO WAY, that Russian President Vladimir Putin was not at least aware of, and implicitly approved this attack. No cyberattack of such unprecedented scale could possibly proceed without Putin being aware well in advance, and either abetting it through inaction, encouraging it or terminating it. Even if Putin didn’t pull the trigger, much like the civil war in the Donbass area of Ukraine, he at minimum allowed it to happen. Biden’s silence on this IS DEAFENING. There is no denying it.

After all, wasn’t it Biden who said Putin had “No Soul” and called him a killer?

EXCLUSIVE: Pres. Biden told @GStephanopoulos that he agreed Russian President Vladimir Putin is a "killer" and will "pay a price" for interfering in U.S. elections. https://t.co/rIe2ms8sSv pic.twitter.com/VtAGCvF9hp

Putin lashed out following the interview’s broadcast telling reporters, ““You know, I remember, in childhood, when we were arguing with each other in the courtyard, we would say, ‘I know you are, but what am I,’” Putin commented. “And that’s no accident. It’s not just a childish saying. There is a very deep meaning in that.”

“I would say to him: ‘Be well.’ I wish him good health. I say that without any irony, without jokes,” Putin proclaimed.

Jen Psaki was asked then by reporters if Biden regretted his remarks, given the massive diplomatic fallout that has resulted. Her reply was uncharacteristically direct. “Nope.”

Does he regret it now? There is likely no denying that.

As Christians across the globe experience mounting persecution, worshippers in India are being brutally attacked and forced out…
byAmalia White
No comments 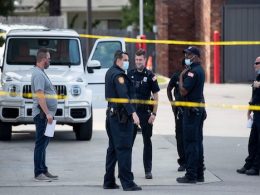 Memphis police arrested another person in the shooting death and robbery of a man last year. Police responded…
byRyan Michael
No comments