AG William Barr has fired back at mainstream media outlets who falsely reported that the DOJ investigation into allegations of voter fraud had concluded, and no evidence had been found.

In Attorney General Barr‘s original comments, he stated that “we have not seen fraud on a scale that could have effected a different outcome in the election.” These comments were immediately misconstrued by the mainstream media to fit their narrative.

Rather than reporting the Attorney General’s exact quote, media outlets ran with the story that the Department of Justice investigation had concluded without finding any evidence of voter fraud in the 2020 election.

“Some media outlets have incorrectly reported that the Department has concluded its investigation of election fraud and announced an affirmative finding of no fraud in the election. That is not what the Associated Press reported nor what the Attorney General stated. The Department will continue to receive and vigorously pursue all specific and credible allegations of fraud as expeditiously as possible,” a DOJ spokesperson said in a statement.

what the Attorney General stated. The Department will continue to receive and vigorously pursue all specific and credible allegations of fraud as expeditiously as possible.” @ClareHymes22 @CBSNews

The article including Barr’s original comments was reported by the Associated Press on Tuesday, and many mainstream media outlets jumped on the story to push the left-wing agenda. The AP’s article read:

“Barr told the AP that U.S. attorneys and FBI agents have been working to follow up specific complaints and information they’ve received, but “to date, we have not seen fraud on a scale that could have effected a different outcome in the election.”

The comments, which drew immediate criticism from Trump attorneys, were especially notable coming from Barr, who has been one of the president’s most ardent allies. Before the election, he had repeatedly raised the notion that mail-in voting could be especially vulnerable to fraud during the coronavirus pandemic as Americans feared going to polls and instead chose to vote by mail.”

“There’s been one assertion that would be systemic fraud and that would be the claim that machines were programmed essentially to skew the election results. And the DHS and DOJ have looked into that, and so far, we haven’t seen anything to substantiate that,” AG Barr added.

“Most claims of fraud are very particularized to a particular set of circumstances or actors or conduct. … And those have been run down; they are being run down. Some have been broad and potentially cover a few thousand votes. They have been followed up on,” Barr continued.

The media clearly ignored phrases such as “so far” and “they are being run down,” which clearly show that the investigation is still ongoing.

Rudy Giuliani, former New York City mayor and current Trump campaign attorney, fired back at AG Barr over his comments, saying, “There hasn’t been any semblance of a Department of Justice investigation. We have gathered ample evidence of illegal voting in at least six states, which they have not examined.”

“Again, with the greatest respect to the Attorney General, his opinion appears to be without any knowledge or investigation of the substantial irregularities and evidence of systemic fraud,” the Trump campaign’s legal team added.

Soon after the election, AG Barr authorized federal prosecutors to pursue any “substantial allegations” of voting irregularities “if there are clear and apparently-credible allegations of irregularities that, if true, could potentially impact the outcome of a federal election in an individual State.”

With the information provided by the Trump campaign’s legal team, and the lack of DOJ statements about investigations into voter fraud, it is clear to many conservatives that nothing is being done to look into these allegations. Concern about the integrity of U.S. elections is rising, and may contribute to the frustration of the American people.

Virginia Man Murdered His Mother... and Her Dog for Thanksgiving

China Is One Step Away From WAR

On Friday, August 5, China officially announced the nation is “canceling or suspending dialogue with the United States…
byMark Megahan
No comments

To the great disappointment of Nancy Pelosi and her January 6 inquisition, the DOJ has declined to prosecute…
byMark Megahan
No comments 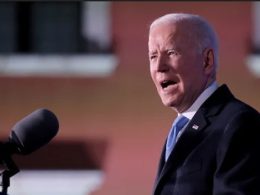 Nobody blames the Kremlin for being alarmed at the latest thing to fall out of Joe Biden’s mouth.…
byMark Megahan
No comments