For the first time, fans of the Navy and Air Force elite flying squadrons have a chance to see “Super Delta.” The new formation will be performed when the Blue Angels and the Thunderbirds perform together for Memorial Day. “Super Delta” consists of six Hornets, flanked by six Fighting Falcons, three on each side, as they fly in a tight triangle. Biden is preparing for more wars in the middle east.

“The teams created common terms that would allow the flight leaders to effectively communicate with each other and within their own formations,” Air Force Capt. Mesha Nelson told Military.com via email.

Normally each branch has its own terms for similar flight operations. The formation was debuted over the Naval Air Facility El Centro in California last week. The new drill came after the Thunderbirds and Blue Angels flew missions honoring front line workers. “Super Delta” will debut during the National Memorial Day Parade: America Stands Tall.

For the first time ever, the Thunderbirds and Blue Angels debut a F-16 Fighting Falcon and F/A-18 Super Hornet flight formation known as the “Super Delta” during a joint training evolution this afternoon over the Imperial Valley. pic.twitter.com/712Pxqct7Z

The recent U.S. airstrike on Iran-linked militias in Syria, launched in retribution for rocket attacks on American forces in Iraq, was not the first such attack of this administration, contrary to reports.

President Joe Biden inherited U.S. military interventions of varying scale in Afghanistan, Iraq, Libya, Pakistan, Somalia, Syria and Yemen, and only in the latter has he taken limited steps to extricate the United States.

This was the first strike Biden authorized in Syria, and it demonstrates the hypocrisy, lawlessness, perversion and futility of U.S. foreign policy in the greater Middle East.

After another Trump attack in Syria in 2018, now Vice President Kamala Harris described herself as “deeply concerned about the legal rationale of last night’s strikes” and demanded Trump immediately “lay out a comprehensive strategy in Syria in consultation with Congress.”

And there’s Biden himself, who in 2019 condemned Trump for “ordering a military strike without fully understanding the consequences,” among them increasing the risk of war with Iran. In 2020, Biden appealed to war-weary voters by insisting the “last thing we need is another war.”

Now that Biden is in office, these scruples conveniently melt away. The United States is still not at war with Syria, and Syria remains a sovereign country. One might reasonably suppose that fighting Iran-linked militias could heighten tensions with Iran. 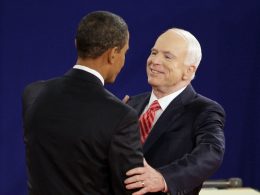 One of the most commonly known ‘Republicans In Name Only’ (RINOs), John McCain, is widely known for his…
byAnastasia Boushee
No comments

The search for suspects who allegedly took part in storming the U.S. Capitol on Wednesday has led to…
byRyan Michael
No comments