For former ‘Empire’ actor turned race-baiting grifter Jussie Smollett, the hits just keep on coming. Smollett, 39, was very publicly convicted on 5 of 6 counts of disorderly conduct for lying to police officers and making false claims that he was the victim of a hate crime motivated by race, sexual orientation, and politics. As was widely reported in the mainstream media (and many leftist pundits still claim in spite of his conviction) Smollett testified that he was attacked by two men, later identified as Nigerian nationals Abimbola ‘Abel’ Osundairo and Olabinjo ‘Ola’ Osundairo who allegedly threw a chemical onto him, and tied a rope around his neck while telling him that Chicago is “Maga Country”. Typically one might say ‘you can’t make this up’ but evidently, yes, one certainly can. Now, he’s being sued not only by the City of Chicago for the costs of the investigation but now the Osundairo brothers will sue… for defamation.

According to The Daily Mail,

The city was faced with a $130,106.15 overtime tab and has since confirmed that it will press ahead with its lawsuit against Smollett to reclaim the cash. Their chances of a win or settlement are now all but guaranteed in the wake of the star’s conviction.”

The city of Chicago’s case is fairly cut and dried and as the Mail reported, almost certain to yield a victory or settlement out of court.

A statement from the city said,

‘The City filed a civil lawsuit against Jussie Smollett to recover costs incurred by the Chicago Police Department investigating what the City believed to be Smollett’s false police reports that he was a victim of a hate crime,’ the statement said.

‘While using a different standard of proof, the jury’s finding of guilt convicting Jussie Smollett of criminal charges stemming from the incident confirms that the City was correct in bringing its civil lawsuit.’

A Dire Reason For The Osundairo Brothers To Sue

However, the claim from the Osundairo’s is much more complex, owing to the accusations from Smollett’s legal team that one of the men engaged in a homosexual relationship with Smollett. Homosexuality is a crime in Nigeria, and they face serious charges upon their return home. Abel and Ola confessed to authorities that Jussie had paid them to stage the fraudulent attack but later pressed suit against the legal team for Mr. Smollett in April of 2019 after the initial charges against him were dropped. The two men sued on the basis that the case damaged both their careers and reputations. In a defamation suit, they claimed that attorneys Mark Geragos and Tima Glandian had maliciously portrayed them as liars and suggested they may have worn ‘white face’ during the attack. But much more troublingly, Smollett’s attorneys allegedly insinuated that Abel engaged in a sexual relationship with Jussie. This could have dire consequences for Abimbola upon his return to his native Nigeria.

They explain in their lawsuit, “Same-sex sexual activity is illegal in Nigeria, which can result in 14 years of imprisonment,” the lawsuit said. “If the accused is married, the punishment is death by stoning.”

“Ms. Glandian’s globally broadcasted statements that Bola Osundairo is homosexual endangers him and the lives of his Nigerian family.'”

The case was initially placed on hold pending a resolution of the criminal proceedings against Smollett who now faces 20 years in prison with a sentencing date to be determined, but a legal update is expected from the Osundairo’s legal team in February, when the suit is expected to move forward.

Court: Remote Worker Who Fell Between Bed and Desk Was Injured While 'Commuting' 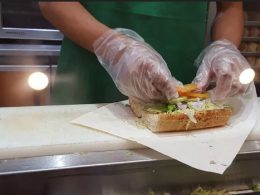 American People Are Being Poisoned

School Shooters Past Comes to Light, Raises Many Concerns

Now that Salvador Ramos killed at least 19 students and two teachers, everyone is talking about how he…
byMark Megahan
No comments