Capital One has decided to close Enrique Tarrio’s credit card because the bank discovered “adverse past or present legal action involving an individual or entity associated with the account.”

Tarrio is currently facing a misdemeanor charge of destruction of property as the result of the alleged burning of a Black Lives Matter banner taken off of a church in Washington, D.C. in 2020, as well as local weapons charges.

On June 29, Capital One sent Tarrio a letter informing him that they were closing his account — which he has had for approximately 12 years — and told him there was nothing he could do to reverse that decision.

In a statement to the Gateway Pundit, Tarrio expressed frustration with Republican politicians and their lack of action on “definancing conservatives.”

“I don’t know if I’m numb to getting banned off platforms already or this is acceptance to the way of the new ‘West’. I don’t know what it would take to finally get Republicans united in speaking up and legislating against this unconstitutional and inhuman practice of definancing conservatives. Maybe if it would happen to them…because it will…they’ll start doing something about it. For now I will do what any entrepreneur would do…and that’s find a temporary solution to this problem until it gets fixed,” he said.

As Tarrio was sending this statement to the Gateway Pundit, he also discovered that he had been banned by his credit card processor.

According to the Gateway Pundit:

“Those who wish to contribute to Tarrio while he tries to get around this blockade can do so on Zelle using the email ‘[email protected]’ At least until they cave to liberal pressure and do the same thing, that is.

The Gateway Pundit has reached out to Capital One asking if they will be banning everyone who charged with misdemeanors — like drug dealers or illegal aliens. We will update this story if a response is provided.”

Tarrio isn’t the only conservative being “unpersoned.” As the rabid left continues to gain power within corporations and institutions, they continue to deplatform, censor, and now definance anyone who disagrees with their narrative.

According to reporting from The National File, Gab CEO Andrew Torba revealed that his platform was banned from three different banks in three weeks alone for “political reasons.” One of the banks informed the CEO that they could no longer do business with him because of “all the bad things the press has written about Gab.”

Another recent “unpersoning” happened to controversial commentator Nick Fuentes. Daily Wire host Michael Knowles, who is no fan of Fuentes, tweeted about the issue.

“The swift and utter unpersoning of Nick Fuentes should worry anyone who in any way contradicts the dominant liberal regime,” his first tweet read.

“For those who haven’t followed the story, ‘unpersoning’ does not refer to his Twitter ban. He’s been kicked off of every major social media platform, reportedly banned from every major financial institution, and placed on the No Fly List without ever being charged with a crime,” Knowles wrote in a subsequent tweet.

For those who haven’t followed the story, “unpersoning” does not refer to his Twitter ban. He’s been kicked off of every major social media platform, reportedly banned from every major financial institution, and placed on the No Fly List without ever being charged with a crime.

The left has moved from censoring and deplatforming people to banning them from conducting essential financial transactions, yet Republicans in Congress have done nothing. The time for compromising with the left is over, it’s time for the GOP to grow a backbone and do something about this.

Wow Even CNN is Beginning to Rethink This Administration's Disastrous Techniques

Holy Smokes, LOOK at What Dems are Trying to Get Away With NOW!!!

Earlier this week, a police officer was killed serving a mental health order. Two other officers were also…
byAnthony Smith
No comments 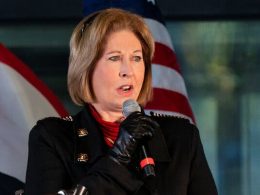 Attorney Sidney Powell has re-emerged and she has a lot to say. In a recent interview, the prominent…
byChris Dorsano
No comments

The job of FBI Agent John Robertson in 2016 was to investigate crimes against children. As he scrolled…
byMark Megahan
2 comments