It’s no surprise that officials in a place so rabidly Democrat that it’s been named for one of their liberal causes, Union City, would come unglued over something so daringly conservative.

Police were immediately dispatched to the Oakland, California suburb Saturday morning to respond to a disturbing hate crime. Someone dared to put up a vile and disgusting “White Lives Matter” banner on clearly posted city property.

That banner is ‘despicable’

When officials in the Democrat enclave learned of the banner they instantly called it a “despicable act of vandalism” and sent armed police and a SWAT team to tear it down.

When cops arrived they started a major investigation and tangled the place in crime tape. Eventually, they decided that no matter how hard they tried, they just can’t seem to find any actual “crime” had been committed.

The thing that has Union City Mayor Carol Dutra-Vernaci hopping up and down, doing Sylvester the cat imitations, is the annoying fact that “whoever erected the banner did not have the proper permit to place it on city-owned property.”

There is no way that the city would possibly stoop low enough to defend the life of a White person. They issued a formal statement to emphasize exactly how “disgusted” they are at city hall by the “racist” sign.

It’s bad enough that White people picked the same weekend as Martin Luther King day to protest election fraud. “The city is disgusted by this despicable act of vandalism that has occurred on the heels of the insurrection at the U.S. Capitol last week and on the weekend of the Martin Luther King, Jr. holiday that celebrates the life and achievements of this important civil rights leader.”

Mayor Dutra-Vernaci is considering how many National Guard troops to ask for as the city remains “on heightened alert to make sure racist incidences like this do not happen again in our community.”

There is no doubt at all that the slogan “White Lives Matter” is inherently racist and any banner stating those words is vile racist hate speech which must be prosecuted to the full extent of the law. The Anti-Defamation League spells it out crystal clear. The phrase, they insist, “is a racist dog whistle.”

The words on the illicit and offensive banner are “a White supremacist phrase that originated in early 2015 as a racist response to the Black Lives Matter movement, which arose to protest against police brutality against African-Americans.”

It turns out that a disproportionate number of African-Americans are criminals. Police officers keep insisting on shooting them for the lamest excuses, like attacking cops with weapons.

Everybody knows that since then, the Aryan Renaissance Society has adopted the offensive phrase. They didn’t just put it on a banner, they printed flyers, forming a loose campaign to popularize the phrase.

It didn’t take long to catch on. “By 2016 other white supremacist groups, including Ku Klux Klan groups, were also using the slogan, and it soon became a staple among white supremacist mantras, continuing even after the original campaigners ceased their activities.” How deplorable.

Biden SCARED Sh*tless, Thinks Military is Going to Attack Him

President Donald Trump made a shocking announcement during an interview over the weekend. He knows things which haven’t…
byMark Megahan
3 comments 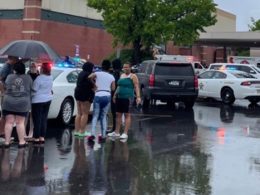 Police are calling an armed citizen “the real hero of the day,” and CNN isn’t happy to report…
byMark Megahan
No comments

Flash Through Her Pinkie Then Out Left Leg

The flash of electricity went in “through the girl’s pinky finger and out of her left leg,” the…
byMark Megahan
No comments

A gunmen shot four people, killing three of them in southwest Houston. Two of the victims killed in…
byChris Dorsano
No comments