The FAA is currently investigating an emergency crash-landing on the busy Interstate 5 freeway near San Onofre, CA outside San Diego. A single-engine Piper PA-32 landed on the southbound lanes of the freeway after declaring an emergency at about 12:15 PM, August 24th. The aircraft clipped at least four vehicles before rolling to a stop against the center divider according to eyewitness accounts. The small plane was carrying the pilot and a single passenger, both survived unharmed.

“He tried to land the plane in a nearby field but was unable to and landed in southbound lanes of Interstate 5,” said Salvador Castro, from the California Highway Patrol referring to the pilot. “Anytime a plane lands on the freeway, it’s going to be pretty catastrophic,” Castro said. “Luckily it’s minor injuries and nobody sustained major injuries or even sustained any fatal injuries.”

FREEWAY CLOSURE: @SDFD in Unified Command with partner agencies have closed southbound I-5 at Via de la Valle due to a plane landing on freeway. Standby for updates. pic.twitter.com/olhnU4YiAt

Eyewitness Accounts Of The Harrowing Landing

According to WITN, Victoria Roberts and her 7-year-old granddaughter, Evie, were traveling on the I-5, heading home when,

“I thought I heard a loud crash, and I thought we had been hit by a semi,” Roberts said. It wasn’t a semi-truck.

“We heard this loud noise, and my grandma yelled at me and said, ‘Close your eyes and your mouth and get out of the car,’” Evie said, but she was trapped. “The back door was jammed, and there was water and glass all over the car,”

Evie thought it was only water, but it was aviation fuel. Luckily though this story has a happy ending. The little girl was able to crawl over the center console and escape the car to be helped by a good samaritan.

“And there was a nice woman named Heather,” Roberts said. Emergency crews rushed to the scene to get the fuel-soaked clothes off of Evie. “They took all my clothes off, and then they wrapped me in blankets,” she recalled.

That’s when reality snapped back into place for Victoria, she took stock of the bizarre scene, ““I see an airplane without a right wing, and I’m looking at the car and going, ‘It’s in my back seat,’”

At the same time, Dane and Sarah Tribett were visiting the area from Austin, TX for their anniversary when the plane slammed into the back of their vehicle according to San Diego’s CBS8. Sarah Tribett told the press,

“I was just like what the heck what happened and I looked over to make sure he was ok,”

“It hit us and then swung around. And then, the wing got stuck in the other car.”

“So, we broke the fall because we and a couple of people behind us drove up to us after and say they literally saw it come down and it landed on our car,”

The FAA is still investigating the incident and has not yet released why the pilot of the Piper declared an emergency or the identities of the pilot and passenger. The aircraft was cleared from the freeway and the I-5 re-opened later that evening. All things considered: that could’ve gone a lot worse. As they say: ‘Any landing you can walk away from.’ Sarah had it right when she said:

“I feel like angels were definitely watching over us today and we felt really blessed and grateful,”

Video: Democrats Evil Plans are Right in Front of Your Face

The House Oversight Committee held a hearing on potential statehood for Washington, D.C., this week. But Rep. Jody…
byChris Dorsano
No comments

Supreme Court Justice Stephen Breyer, the oldest of the justices, has told CNN that he has no plans…
byChris Dorsano
No comments 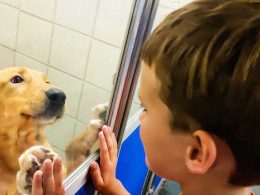