Two FBI agents testified in the Sussmann trial on Monday and both confirm that it would have made a huge difference to know that the tip walking in their back door came from someone working for the campaign of Hillary Clinton. After months of everyone wondering if John Durham really exists, a simple charge of lying to the bureau has twisted and turned into a huge problem for the Deep State.

Michael Sussmann allegedly lied to the the FBI when he told them he wasn’t working for any particular client, he just wanted the bureau to open an investigation into Donald Trump out of the goodness of his heart. While the defense team hasn’t even tried to suggest he didn’t lie, their focus has been that the lie didn’t matter.

If it wasn’t “material,” then there really isn’t a crime. Durham, on the other hand, has been trotting out one witness after another, who confirm in open court that they were treated like mushrooms, kept in the dark and fed bullcrap.

Starting the second week of trial with a bang, the prosecution called two FBI agents to the stand, back-to-back, on Monday, May 23.

Both were there to testify that “clarity regarding the source of allegations of a secret hotline between the Trump Organization and Russia’s Alfa Bank would have influenced the bureau’s investigative approach to the now-debunked collusion allegations.” They both confirm that knowing or not really did matter.

When Sussmann rang the FBI doorbell, peddling information about an alleged but manufactured “Trump organization backchannel to Moscow through Russia’s Alfa Bank,” he was a partner at the law firm Perkins Coie. His job was “representing the Democratic National Committee.” He had another client at the same time.

A “tech company executive” named Rodney Joffe, who was one of DARPA’s go-to guys for technical intelligence. FBI agent Ryan Gaynor and former FBI agent Allison Sands both confirm the real story doesn’t match up with the hopes of the defense team.

Gaynor would have said no

When FBI agent Ryan Gaynor took the stand, he was first to confirm that “had he known Sussmann was representing the DNC, he likely would not have volunteered to assist in the investigation.” Not only that, “if Sussmann was paid by the DNC or the Clinton campaign, it might have impacted how the investigation was opened.”

Sussmann’s attorney’s cringed when he mentioned the close hold placed on Sussmann’s identity “prevented him from being able to discuss it with the Chicago branch.” To try and accomplish some damage control, the defense tried “to discredit Gaynor’s memory regarding whether Sussmann said he was representing the DNC and whether there was a close-hold in place.” It didn’t work.

When Allison Sands was sworn in, the former agent also was quick to confirm the lie was material. She was lied to also. “Sands testified that she was informed the investigation began with a referral of information from the Department of Justice. Only later did she find out that the information actually came from then-FBI General Counsel James Baker. After that, she eventually learned that an anonymous third party gave Baker the data.”

Did that make a difference? You bet it did. According to Ms. Sands, “knowing the source of the information would have helped her assess its credibility.”

Being misinformed that the package came straight from the justice department “gave it more weight than if someone just walked into the FBI with the data,” which is what really happened. She also was able to confirm that if she knew it came from Sussmann, it probably would have been tossed in the trash as a waste of time.

During her cross examination, Sands noted “FBI headquarters told her they were working on letting the Chicago field office interview the source of the data, but that she was told to focus on the data they could get from the logs.” She’s not happy about that because “being able to interview the source would have helped make her job easier instead of having to rebuild the data from scratch to verify the allegation.“

High Profile Progressives Sue School For Not Being Woke Enough 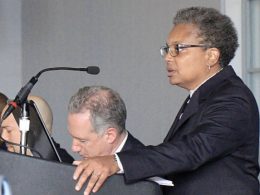 How can the mayor of Chicago get the entire nation in an uproar? Well, the mayor of one…
byStaff Editor
No comments

Flight tracking of celebrities breaks the rules. Free Speech may be protected but not everything you say or…
byMark Megahan
No comments