There may be a couple of cartel hitmen working for “Tropa Del Infierno” wandering around Zapata County, Texas. Thanks to Joe Biden and his wide open border they roam back and forth as they please.

Cartel killers on the loose

They call themselves “Troop of Hell” so it’s no surprise the Mexican cartel would have a hitman or two on the payroll. They seem to have a couple of pros they call “sicarios” who faded like ghosts through cracks in the southern border to invade a man’s home in Texas to murder him.

Police caught their local accomplices. Otherwise, nobody would have known they were even there. They disappeared into the night and haven’t been seen since.

Authorities in Zapata County need help from the public to “identify” the cartel hitmen for them. The murder happened in late July but they’re still clueless. On Friday, July 23, “police responded to a call in the Medina Addition where gun shots had been fired in the early morning.

Arriving at the scene of the incident, police found a young man in his early 20s who had been shot multiple times in his own home, where he died of his injuries.” They soon released his identity as Santos Flores III. He was 22 at the time.

It didn’t take police long to figure out that “the victim was murdered during a home invasion.”

What they learned at the scene led to the arrests of David Mendez Jr. and Billardo Alaniz. The pair were charged with murder and home invasion but never got out of the car. The cartel only wanted them to drive.

According to the Sheriff’s office, “during the course of the investigation it was discovered that Mendez and Alaniz had picked up two unidentified male subjects who had entered the United States illegally through Falcon Lake.” Those jet-skis were a good investment.

“The two unidentified male subjects were later found to be cartel hitmen also known as ‘Sicarios’ for the ‘Tropa Del Infierno’ organization.”

Police note they are “highly qualified hitmen” at that. Troop of Hell is considered by police to be a “professional organization.” What they learned after beating the cartel suspects up a little is that “Mendez and Alaniz were allegedly responsible for taking the two hitmen to the victim’s residence, where he was murdered.” Then they went to kill time.

“Mendez picked up the hitmen miles away from the scene of the crime and transported them to a safe house.” Mission accomplished.

Somehow the Sheriff’s department managed to identify one “person of interest” but they don’t have a name to go with the photo. Half of Texas is looking for the alleged hitman. “The sheriff’s office is in charge of the investigation with assistance from the Webb and Zapata County District Attorney’s Office, Texas Department of Public Safety Texas Rangers Division, and the U.S. Border Patrol.”

The whole team has “been working diligently in hopes of finding the individuals that are responsible for committing this drug cartel related home invasion murder.”

Unlike the migrant caravan madness associated with illegal aliens, this one didn’t cross any borders and everyone went…
byMark Megahan
2 comments

Liberal talk show host Mika Brzezinski is a never Trumper with raging TDS. On a recent show she…
byRyan Michael
No comments

This raises even more questions about his death...
byChris Dorsano
2 comments 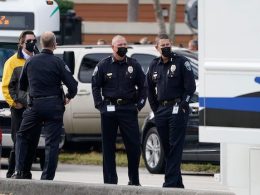 It began as a cocaine investigation and it was supposed to be a takedown, but it turned into…
byRyan Michael
No comments
"