Hollywood Crime the MSM is Refusing to Report on

President Trump’s star on the Hollywood Walk of Fame has been vandalized, again. The same lunatic has been arrested for damaging the star in the past. It’s election day and Trump Derangement Syndrome is reaching dangerous levels in some Lefties. Will mainstream media cover this story?

James Otis turned himself in to police after vandalizing President Donald J. Trump’s star on the famous strip of Hollywood Boulevard. The man has committed this same crime multiple times since Trump took office in 2017.

For his latest mental breakdown, Otis showed up to the Walk of Fame early Friday morning dressed like the super hero Incredible Hulk. He was wielding a pickaxe which he used to hack away at the President’s star before fleeing into the night.

Some people forget that Donald Trump has had quite the career in film and television. He earned the Hollywood Star back in 2007 after playing himself in the movies Home Alone 2, Zoolander and Two Weeks Notice, just to name a few.

Trump also had his own hit TV show, The Apprentice, and he hosted several beauty pageants over the years. Trump’s Hollywood Star has been vandalized so many times that the city has covered it up with plywood and surrounded it with fencing to prevent more attacks. Apparently, the barrier wasn’t enough to stop James Otis from unleashing more of his pent up rage at the President.

Hollywood is a Left-wing city, home to many actors and celebrities who openly despise the President. The West Hollywood City Council even passed a resolution to request the removal of Trump’s star from the Hollywood Walk of Fame.

In an email statement, West Hollywood Mayor John Duran said “Earning a star on the Hollywood Walk of Fame is an honor. When one belittles and attacks minorities, immigrants, Muslims, people with disabilities or women, the honor no longer exists.”

Mainstream media has been silent about the attack. No surprise there really. They’ve been pushing the false narrative about President Trump inciting violence from his base when the truth is the exact opposite. In recent years Left-wing politicians have been the ones encouraging their supporters to riot, loot and “get up in the faces” of Republicans.

CNN talking head Chris Cuomo recently defended BLM and Antifa groups for rioting and burning down American cities when he said, “Tell me, where does it say protests are supposed to be peaceful?” Someone should tell “Fredo” that it specifically says the word peaceably in the First Amendment of the Constitution:

“Congress shall make no law respecting an establishment of religion, or prohibiting the free exercise thereof; or abridging the freedom of speech, or of the press; or the right of the people peaceably to assemble, and to petition the Government for a redress of grievances.”

Ayanna Pressley, a radical Left-wing Congresswoman from Massachusetts, recently told MSNBC that “There should be unrest in the streets as long as there’s unrest in our lives.” Nancy Pelosi told an interviewer, “If there’s collateral damage for some others who don’t share our views then so be it.” There are dozens of examples like this.

The tolerant Left strikes again. They claim to be empathetic and inclusive but that only applies if you agree with everything they stand for. If you question them at all, they want you to be harassed, doxed, fired from your job, business burned and destroyed, banned from social media, canceled, beat up and even murdered. Let’s pray the American people make the right decision this election.

MSNBC Guest Rips Out Earpiece ‘Not Listening to BS, Walks Off

You have to see this!
byChris Dorsano
2 comments

Federal Judge Reggie Walton appears to have an axe to grind directly on Donald Trump, but he may…
byMark Megahan
No comments 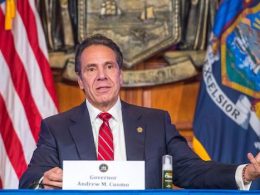 Well would you look at this. Now that the election is over, New York Governor Andrew Cuomo wants…
byRyan Michael
No comments
"