The Department of Justice is making a desperate attempt to stop the new abortion legislation which has taken effect in Texas, despite the fact that the Supreme Court of the United States has refused to strike down the law. The Biden administration is seeking an emergency federal court order to put a stop to the law, which has now been in effect for two weeks. The judge will make a decision on the request in another two weeks.

The Supreme Court declined to hear the Texas case when it reached them, meaning that it was allowed to go into effect in spite of the legal challenges.

The Justice Department is now trying its own challenge by asking federal judge Robert Pitman to immediately freeze enforcement of the law.

The Texas legislation is a novel approach to fighting against abortion. It blocks abortions from taking place after a fetal heartbeat is detected but it does not rely on state enforcement.

Instead the legislation is to be enforced through civil suits; citizens are able to challenge abortion enablers in court with financial assistance from the state.

Texas abortion advocates were hoping that the courts would employ Roe v. Wade to shut down the law before it could go into effect but the new legal approach appears to have worked thus far.

Pitman will hear the new Justice Department request at the end of September with a formal hearing, although he has not moved to immediately halt enforcement.

A messy legal battle ahead

Even if the challenge is successful for the Justice Department, Texas will still be able to appeal to a conservative federal appeals court, which is likely to side with the state government.

The Justice Department ghoulishly claimed that there was a constitutional right to abortion which was being violated by the government of Texas.

There is no such right guaranteed in the constitution, though that has never stopped activist judges from inventing it when necessary in the past.

Ultimately the struggle over abortion in Texas  will likely still be decided by the Supreme Court, which will soon hear a rare abortion case relating to a Mississippi law.

While the conservative majority on the court might wish to definitively put a stop to the legacy of Roe v. Wade, that decision may prove to be impossible.

President Biden and other Democrats have indicated that they are willing to pack the court if necessary, meaning that a ruling by the conservative justices could be quickly reversed under the right circumstances. 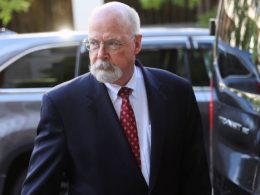