Lori Lightfoot Doubles Down On Her Hatred for Caucasians

Chicago’s alleged Mayor, Lori Lightfoot isn’t sure who she hates more, Caucasians or men. If you’re a Caucasian male, she definitely hates you. She has no intention of apologizing for it either.

You can forget that Constitution thingy Lori Lightfoot declares, we’re in an open borders New World Order now where police are being replaced with social workers and citizens will be forced to defend themselves with rocks and bricks.

Get with the program and start looting or the Antifa® Thought Crimes Patrol will be at your door, looking for evidence you might be a deplorable Donald Trump supporter. They call that “insurrection” and can put you in a FEMA camp for 10 years over it.

Not only does she refuse to say she’s sorry, confirmed lesbian but alleged Mayor Lori Lightfoot doubles down and confirms she’d do it again. As Daily Wire reports, the bug-eyed liberal “is “unapologetic” over her controversial decision to grant only non-white and female reporters interviews as part of her mid-term media blitz.”

That’s racist and illegal discrimination but everybody knows, Democrats are above the law.

Progressive Democrat officials including Lori Lightfoot have inside information that laws are actually a thing of the past. Nobody has actually made the announcement yet but the Palace is expecting word from the Rothschild consortium any day now.

Lightfoot is totally silent about the “record-breaking spike in crime” her city has seen since they defunded the police. If she had her way she wouldn’t talk to a man ever again. If any of the other alleged sexes want to interview her, they better not be White.

“I would absolutely do it again. I’m unapologetic about it because it spurred a very important conversation, a conversation that needed to happen, that should have happened a long time ago.”

The flap got started when a Chicago reporter tweeted that a spokesunit for Lightfoot informed the press that the Voodoo priestess “is granting 1 on 1 interviews – only to Black or Brown journalists.”

All the other reporters rushed to confirm what Lori Lightfoot said and verify her liberal insanity, which they did with ease.

The carpet-munching mayor didn’t blink her Marty Feldman eyes, defending the official policy as a way of “calling attention to what she termed the ‘overwhelming whiteness and maleness’ of the Chicago media.”

Major airline companies are showing just how discriminatory they are and COVID has unveiled their deep state allegiance.…
byAmalia White
No comments 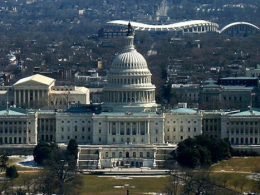 Need some extra security for your home? Well, if you are a member of Congress, all you need…
byAnthony Smith
No comments

Hillary Clinton colluded with Russians – to falsely accuse Donald Trump of colluding with Russians. The FBI was…
byMark Megahan
27 comments