Netflix – the company, not it’s executives, is facing criminal charges in Tyler County, Texas. While time behind bars is obviously out of the question, fines are a totally different story. For promoting pedophilia in violation of the Texas statutes, the video streaming giant is already on the hook for “up to $20,000.” What the lawyers are arguing over is how much the fine should be if the criminal defendant company made money off the crime. In that case, the fine is calculated as “twice the amount earned.” That part is clear in the law. The attorneys are fighting over whether that’s twice the profits in Tyler County, or twice the profit everywhere in the world.

Filmmaker Maïmouna Doucouré said in a recent interview that “the people who started the controversy over her movie have not actually seen it.” She’s “eager to see their reaction when they realize that we’re both on the same side of this fight against young children’s hypersexualization.” In other words to fight sexual exploitation of pre-teen girls, they had to sexually exploit pre-teen girls. It’s just fine for Netflix to profit from the same material which exceptionally sick perverts use to get their jollies. They’re in it for the kids.

A grand jury was convened and it didn’t take long for an indictment to be issued against the media behemoth for “promoting ‘Cuties,’ a French film about an 11-year-old Senegalese immigrant who joins a dance group.” A group that specializes in “twerking.” The grand jury had no trouble declaring the film a “promotion of lewd visual material depicting a child.” In Texas, that’s a felony. As Shannon Edmonds, director of governmental relations for the Texas District and County Attorneys Association explains, “it’s unclear, if a court determined Netflix made money off a crime, whether that would mean the fine could double the amount of money that was gained only in Tyler County, where the court case is handled, or worldwide.”

Big name GOP lawmakers including Texas Senator Ted Cruz and Rep. Brian Babin teamed up with “a group of more than 30 House GOP lawmakers.” While Cruz sent a letter to William Barr asking the Attorney General to prosecute Netflix, Babin called his son. Lucas Babin happens to be the District Attorney for Tyler County, Texas. In a press release on Tuesday, he announced his decision to move forward with an indictment “for the promotion of the film in his county.” It wasn’t a tough decision, he relates. “After hearing about the movie Cuties and watching it, I knew there was probable cause to believe it was criminal. If such material is distributed on a grand scale, isn’t the need to prosecute more, not less?”

According to the indictment, “Netflix knowingly promoted work that ‘depicts the lewd exhibition of the genitals or pubic area of a clothed or partially clothed child who was younger than 18 years of age at the time the visual material was created, which appeals to the prurient interest in sex.'” Even though it doesn’t show actual nudity, “it includes a minute-long scene with close-ups of the girls in the dance group gyrating their thighs, butts and stomachs.”

WATCH: Business Owner Takes Things Into His Own Hands With Shotgun, Looters Unprepared

One merchant in upper New York state was well prepared as he sped to his store, with a…
byStaff Editor
No comments 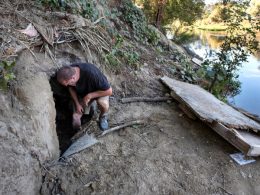 Cave Dwellers Bring Nightmares and Danger to This City

On top of all the other problems which Modesto, California, has with homeless people, they’re infested with cave…
byStaff Editor
No comments