New College Admission Scandal Emerges, Democrat Lawmaker at the Center of It

California’s Congressman Ted Lieu (D-CA) is in trouble, and that’s putting it lightly. It’s been just over two years since stories broke of the massive College admissions scandal and  Operation: Varsity Blues snagged 34 of some of the richest and most influential parents in the United States for rigging entrance exams and bribing College officials to benefit their children. The investigators may have missed one, though they can’t be too harshly blamed for it, he was committing his crime in a whole different way they weren’t even looking at. Lieu is now under tight scrutiny and likely facing a Federal investigation for a donation of over $50,000 from the campaign funds from the lawmaker to Stanford University. Stanford is Lieu’s own alma mater, and his son is enrolling as a freshman this year. It absolutely reeks of quid-pro-quo.

At #Stanford yesterday with @CoryBooker for our 25th class reunion! pic.twitter.com/MOEoelfjd2

The National Review spoke to former FEC Chairman Bradley Smith writing, “it’s unlikely that Lieu has crossed any legal line with his donations to his alma mater. Campaign finance law prohibits using campaign funds for personal use, Smith said, but the money can be used for any other lawful purpose, including donations to universities and other charitable organizations.”

“It’s actually relatively common for congressmen, especially senators who might have big campaign funds built up, to give a bunch of money to their alma mater,” Smith said, noting that it’s more common when a politician is retiring or has leftover money from a state campaign fund that can’t be used in a federal race. “If you go around the country, you can find lots of universities that have centers named for a former senator or congressman.”

Lieu has shown no indication that he’s either retiring or declining re-election.

The Emerging Scandal Of The California Lawmaker

In spite of RedState’s Jennifer Van Laar calling attention to Lieu’s highly questionable donations, calling them “Part 2: Shades of Varsity Blues?” in May of 2019, it would take now suspended Twitter User @RealBFolks with their 14,900 followers to call down greater scrutiny on the Democrat. At the time of Van Laar’s story, Lieu’s son was still in high school.

“Why is Rep. Lieu suddenly giving so generously to his alma mater (which is one of the elite universities involved in the “Varsity Blues” scandal)? There’s nothing concrete tying his gift to any personal gain, but since one of Lieu’s sons is in high school, the timing is rather curious.”

Now that it has been confirmed that the Congressman’s son will attend Stanford, Jennifer Van Laar’s foreshadowing suspicions would seem to be vindicated. It pays to be the son of a Democrat lawmaker.

What a REAL Insurrection Looks Like, and The Deaths Associated

A disgraced politician, former Labour Party councilor was caught with 290,000 images of children obtained from an illegal…
byAmalia White
6 comments 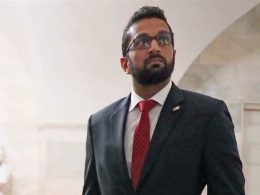 As chaos consumes the fascist city of Portland, Oregon, federal agents are already being withdrawn as violence becomes…
byAmalia White
One comment
"