Schiff is out of control!

Rep. Adam Schiff (D-CA), who is about to be defeated on his attempt to impeach Trump, has now resorted to outright fearmongering to turn Americans against Trump.

According to Schiff, the State of Alaska could be sold in order for Trump to elicit help from the Russians in the upcoming election.

I can only imagine what some of the great Democrats in history would think about the statements made by Adam Schiff.

Hearing something such as this makes it very clear Adam Schiff no longer deserves to represent We the People.

Schiff, in trying to garner support for his impeachment effort, stated, “If abuse of power is not impeachable … Trump could offer Alaska to the Russians in exchange for support in the next election or decide to move to Mar-a-Lago permanently and let Jared Kushner run the country, delegating to him the decision whether to go to war.

“Because those things are not necessarily criminal, this argument would allow that he could not be impeached for such abuses of power.

“Of course, this would be absurd. More than absurd, it would be dangerous.”

As the Chairman of the House Intelligence Committee, every word that comes out of this man’s mouth is taken extremely seriously, yet he abuses that honor.

Take a look back at Schiff’s “reading” of the Trump phone call with Ukrainian President Zelensky.

Schiff chose to use his own words without actually acknowledging he was doing such.

An example of this was when Schiff stated, “I have a favor I want from you.

“And I’m going to say this only seven times, so you better listen good.

“I want you to make up dirt on my political opponent, understand?

That was Schiff’s interpretation of what was said, nowhere near the actual words in the transcript.

Schiff was destroyed by the administration and even a few liberal pundits call him out for a very far-fetched version of the actual facts that took place.

Mr. Schiff will be challenged in the next election by Jennifer Barbosa, who took Schiff’s most recent words as an opportunity to make her case for unseating this madman from office…

Adam Schiff said we have to impeach the @POTUS or he "could offer Alaska to the Russians.”

Democrats have become the enemy of the people, with Schiff being one of the lead henchmen of the party.

He is a liar, he cannot be trusted, and he is dangerous… he must be voted out on election day.

The FBI dropped both the hammer and the anvil on Tennessee State Democrat Senator Katrina Robinson. Her champagne…
byChris Dorsano
No comments 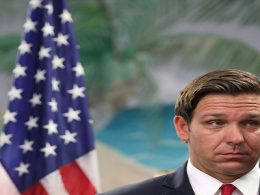