Since the Obamagate transcripts hit the streets a few days ago there have been enough announcement “bombshells” dropping that it seems like we’re in a war. That’s exactly what it is too. War between the Democrats and the Americans for control of our country.

Susan Rice wants to be Joe Biden’s second in command. Unlike Tara Reade, Rice assures creepy Joe, she’ll say yes. That is a truly dangerous combination with terrifying implications for the “Rule of Law.”

After they were finally pried out of Adam Schiff’s locked filing cabinet, where they were stashed for the past two years, the Obamagate transcripts revealed that Susan Rice was in on the meeting where Obama took control of the plot to overthrow the incoming president.

Thirty minutes after Donald Trump was sworn into office, the ex-national security adviser illegally sent herself an email documenting aspects of that meeting. She just made a formal announcement that she wants to be Joe Biden’s Vice President. She is “humbled and honored to be among the extremely accomplished women who are reportedly being considered in that regard.”

Rice and Biden got along great when they worked together on the plot to overthrow President Donald Trump. “I know Joe Biden well. I’ve worked with him very closely.” She just wants to get back in charge of any kind of pesky investigation which might be brewing.

The Democrats are desperate

Creepy Joe Biden has his hands full lately with Tara Reade’s sex abuse allegations. Every waking moment, which are fewer these days, is spent trying to explain to all the liberal progressives why pound me too doesn’t apply to him.

Now, Susan Rice amazingly shows up on the short list of potential running mates. The Democrats know if they are going to insist on a woman for the job, she better know how to take care of herself with a spray bottle. Susan Rice is cutthroat enough to handle the job, so she made an announcement.

Rice just wants to get her claws back in control of the intelligence community before she hangs for treason. She’s “committed to doing all she can to help Biden take the White House.” She’s there in “whatever capacity” he needs. She went on to insist that she’s not “campaigning for anything.” She just wants to make sure Biden wins.

“I believe that’s what is vitally important for the future of our country,” Rice said. She showed why she was in charge of intelligence too, pointing out that she knows you just snickered when you read that. “And it’s not about me. It’s not about my ambitions.” Sure it’s not. It’s about the ambitions of everyone high up in Barack Obama’s former administration to avoid the thirteen steps up to the noose.

Before Biden makes his final choice announcement, he may want to wait to hear what Senate investigators have to say. They are looking into that sneaky email documenting the “meeting she previously had with Obama about Michael Flynn.” Half an hour after she was no longer a government employee, she used her official account to send an email to herself. Obama stressed “his continued commitment to ensuring that every aspect” of the Russiagate coup plot was handled “by the book.”

It contained classified information which may make her criminally liable and she also copied it to Curtis Ried, who was one of her staffers. Why did he have a “need to know?” Not to mention the million dollar question, “Why would the president, in the last fortnight of his tenure need to remind the FBI director, the deputy attorney general, the vice president, and the national security adviser to carry out the Russia investigation ‘by the book’?”

John Brennan Reeking of Sedition, Loses It for ALL to See 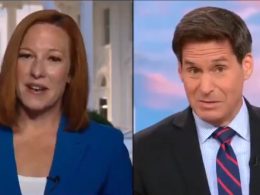 Joe Biden stumbled into an easily disproven lie during an attempt to pander to workers in Pennsylvania. Biden,…
byChris Dorsano
No comments