Trump Says THIS about Georgia Secretary of State

President Trump has had enough of Georgia Secretary of State Brad Raffensperger. Trump claims Brad along with the state’s Governor are being weak on voter fraud and allowing Democrats to steal the election. Trump is convinced he won the traditionally red state in a landslide.

A recorded one-hour discussion between President Donald Trump and Secretary of State Brad Raffensperger will now be heading to the courts, according to the Georgia Republican Party chairman.

Hours after the Washington Post broke the story of a call where Trump is heard pressuring the state election head to recount the votes, Republican Party chair David Shafer said the president plans to sue.

“President @realDonaldTrump has filed two lawsuits – federal and state – against @GaSecofState,” Shafer tweeted. “The telephone conference call @GaSecofState secretly recorded was a ‘confidential settlement discussion’ of that litigation, which is still pending.”

Shafer, earlier in the afternoon, called the recording “mind boggling” and suggested that it was done by Raffensperger and his lawyers.

However, at this point, no agency has officially released where the audio officially came from – or who recorded it. He said he has made open records requests regarding the recording which “have never been acknowledged or answered.”

And while Shafer was perhaps the first major name to weigh in on the release, at least one other name currently at the center of Georgia politics has done so as well – and has a very different opinion.

“At this moment, when the President of the United States calls on Georgia election officials and tries to intimidate them to change the result of the election to disenfranchise Georgia voters, to disenfranchise Black voters in Georgia who delivered this state for Joe Biden and Kamala Harris, that is a direct attack on our democracy,” Jon Ossoff said.

Ossoff also called on Senators David Perdue, who he is running against, and Kelly Loeffler to defend voters from those types of actions. The Georgia runoffs are tomorrow, January 5, and hopefully Ossoff will be banished back to his film making career. 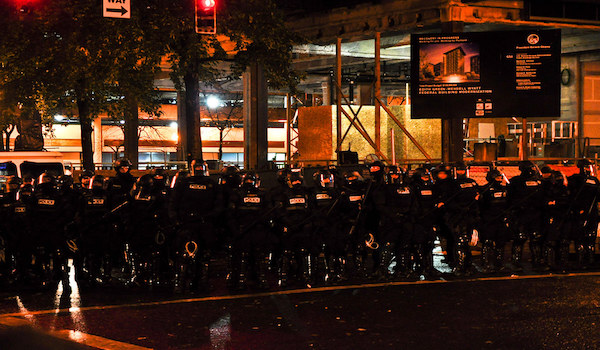 As chaos consumes the fascist city of Portland, Oregon, federal agents are already being withdrawn as violence becomes…
byAmalia White
One comment