Liberal prejudice and hypocrisy are on full display in Hannibal, Missouri at Jim’s Journey: Huck Finn Freedom Center. Faye Dant, founder, curator and Executive Director of the privately owned alleged museum is also a shining example of irrational anger, hatred and division. Her “freedom center” doesn’t want anything to do with free speech, despite Huckleberry Finn being one of the most banned books in the English language. “Hannibal doesn’t need your hateful divisive rhetoric in our town. Stay away!” She wrote to a group of freedom promoting patriots.

The word “prejudice” literally means to pre-judge someone or something. Activist and historian Faye Dant is displaying her own conditioned responses against anyone who isn’t like her. Dant is supposed to be promoting freedom but what she’s really trying to do is cash in on local lore.

Hannibal, Missouri, happens to be the home town of Samuel Clemons, who wrote under the pen name Mark Twain. The cave that Tom Sawyer and Becky Thatcher were fictitiously stuck in is nearby. Huckleberry Finn, Tom’s literary loyal companion, is famous. The book about him was banned almost the moment it came out and keeps getting banned, for different reasons, generation after generation.

When administrators for “freedom” fighting Ron “Grey Wolf” Coleman approached Ms. Dant about using their “freedom” center facilities for an upcoming meet and greet stop, she was receptive at first. Not for long. After getting more information from the group, her own prejudice was revealed. At first, Dant offered the use of a table outside her facility but asked for more information. An admin for the Grey Wolf Walk promptly complied.

“All I can tell you is this in a nutshell, he loves this country and is fighting like hell to get it back and out of the hands of destructive people in the white house and congress. He is humble and it saddens him that people are not waking up. So he is doing all he can to change that.” Ms. Dant came unglued.

The hateful and racist reply which Faye Dant shot back was totally uncalled for. She could have given a thin but plausible neutral denial. Instead, the facility’s director responded with personal and vindictive prejudice and divisive hatred. “Hahaha! help no. I see the reference to grey. I heard you were itching fo another ass kicking from some true patriots.” Clearly “help” wasn’t the word she intended in that spot. “You dare use the word destructive after what y’all dumb kool-aid drinkers did on Jan 6th. Hannibal doesn’t need your hateful divisive rhetoric in our town. Stay away!”

After that exchange, a higher ranking admin shot off a little note to the local tourist promotion board, Visit Hannibal. The email requested “an immediate apology” from Dant for her uncalled for remarks. Ron Coleman is an Air Force Veteran “walking across America for ALL people’s rights.” Nobody in the group was involved in the January 6th incident and “we do not believe in violence or hatred, or racism. We are fighting for ALL AMERICANS.”

Doxxing is a no-no.

She couldn’t let her prejudice go after her racist rant in email. Ms. Dant had to go the extra mile to doxx Grey Wolf’s admin on Facebook. That prompted a Facebook message exchange.

“I don’t care if you put the email out on Facebook please remove my phone number, name and email. This is called doxxing. You may know to search for and publish private or identifying information about (a particular individual) on the internet, typically with malicious intent.” That can literally be dangerous to people.

Once again, Dant’s response underscores her ignorant and uncalled for prejudice. “I heard you folks like putting folks personal information out there. One of your favorite tools.” She’s the only one doing it. A couple of Grey Wolf’s loyal followers on the path to restore freedom in America have a response to her emails. The first comes from Jauneil Brooks aka “Kid Cowboy.”

You may remember him from his impassioned speeches in The People’s Convoy Senate meeting last March. When he heard about the way Grey Wolf and his group were criticized by Dant, he replied, “since when was walking across the United States hateful divisive rhetoric?” He personally was labeled a domestic terrorist for wearing a sweatshirt.

Singer-songwriter Steve Spurgeon wasn’t immediately available for comment about the unfair prejudice but he prophetically weighed in on the issue when he recently sat down with Grey Wolf in Beatrice, Nebraska. Faye Dant has a Martin Luther King, Jr. quote on her Facebook page which Steve is real familiar with. “We may have all come on different ships but we’re in the same boat now.” That was the subject of their recent talk. He “envisioned all of America on one big ship. We’re all in this together and if it goes down we all go down with it.” That’s a really good point.

“Saving America isn’t a Republican issue or a Democrat issue. Everyone needs to pick a side in right over wrong. Evil is here and we need to stand up.” The real questions everyone should be asking themselves are: “Is it right or wrong to be a hypocrite? Is it right not to care about other people? Or is it wrong not to care about other people? Is it right to point the finger and scapegoat the other person for the problems or is that wrong?” As we can see, Faye Dant is on the side of hypocrisy.

Judge Has JUST Set Him FREE

Radioshack was one of several major companies that went bankrupt and started quietly disappearing in the past decade.…
byChris Dorsano
No comments

Candace Owens has been one of the biggest Trump supporters since Trump walked down that escalator. That no…
byStaff Editor
No comments 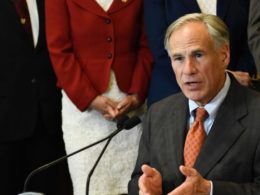 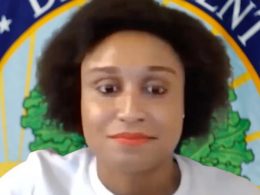 Did you know that “discipline” in school is racist? Yep. Kayla Patrick says so. It’s only administered because…
byStaff Editor
No comments