A retired CIA officer warns that the liberals’ plans for election day and the direction of our country are more sinister than most can imagine.

BLM and Antifa Take Over

In an article written in Revolver News, Sam Faddis discusses the dangers associated with Black Lives Matter and Antifa and what that means for the future of America if their reign gains traction.

As Black Lives Matter and Antifa rioters destroy cities across the United States a plan to overtake the White House has been formed by these dangerous Marxist groups.

The anarchists have taken from burning the streets to infiltrating into residential neighborhoods and targeting everyday people. They have now set up camps outside of the homes of Republican politicians and police chiefs.

The establishment media has labeled the destructive and dangerous riots as mere “peaceful protests.” It is plausible, that members of these groups believe they are rioting in the name of justice and that the United States will turn into a more fair nation.

“Of course, people harbored the same delusions in 1959 Cuba and 1917 Russia. Even the foot soldiers of those revolutions likely believed they would still have the countries they grew up in, just with a brighter, more democratic future. They discovered far too late that at the heart of the movement in which they were caught up were hard men with very different ideas about the future,” Faddis writes from a CIA perspective.

Our country could not survive a full-on communist radical attack from BLM and Antifa.

“We are not experiencing a wave of social unrest generated by injustice or police brutality. We are watching an insurrection in progress, one which uses police violence as a pretext, but which has as its goal the destruction of the existing social, economic and political order in the United States,” the former CIA operative continues.

“Refuse Fascism is one of the primary umbrella organizations supporting Antifa demonstrations nationwide. Refuse Fascism is a creation of the Revolutionary Communist Party of the United States. If you watch footage of the chaos in our streets, you will quickly see signs linked to both groups.”

As BLM and Antifa use race and political ideologies to try and divide the masses, in many ways they are succeeding. The question is, will the ones standing for unity and the truth be strong enough to combat the hate and destruction from the other side?

Dems Make HUGE Mistake, This Will Unite the South

Larry Elder Just Cost Himself Governor By Answering This 1 Question

Just when it looked like California had a glimmer of hope, Republican governor candidate Larry Elder decided to…
byAmalia White
No comments 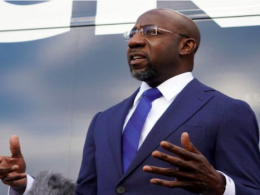 They Found 215 Unmarked Graves of Children…Then They Found This

It’s a nightmare for Cowessess Tribe or First Nation as they’re called in Canada. Searchers have announced a…
byChris Dorsano
No comments