Jacob Blake’s mother appeared on CNN, denouncing the rioting and looting in her son’s name, and apologizing to President Trump.

“My family and I are very hurt and quite frankly disgusted. And as his mother, please don’t burn up property and cause havoc and tear your own homes down in my son’s name.

You shouldn’t do it. People shouldn’t do it anyway, but to use my child or any other mother or father’s child — our tragedy — to react in that manner is just not acceptable,” Blake’s mother, Julia Jackson, said.

“For our president, Trump: First I want to say a family member and I don’t know if it was heard or not said something that was not kind. She is hurting and I do apologize for that.

Our outburst does not reflect our behavior. And then also, for President Trump: I’m sorry I missed your call because had I not missed your call, maybe the comments that you made would have been different… I’m not mad at you at all. I have the utmost respect for you as the leader of our country,” Jackson said.

Riots erupted after the police shooting of Jacob Blake. Businesses have been looted and burned to the ground. A used-car lot was set on fire. Kenosha, Wisconsin is beginning to look like a war zone.

Julio Rosas, Marine and journalist from Townhall.com, interviewed business owners from Kenosha about the damage:

I spoke with Scott and his mother Linda. Their furniture store was set on fire last night during the Kenosha riots. Linda cried at the sight of the wreckage.

Scott had a response to people who would say it's just property and there's insurance. Full vid: https://t.co/y1F7QgigE6 pic.twitter.com/Zw1y6ayds6

Liberal Media is Dead Set on Bashing The RNC Convention...Here is the TRUTH They Wont Tell You

The Shocking Details of FBI Intervention of Hunter’s Laptop 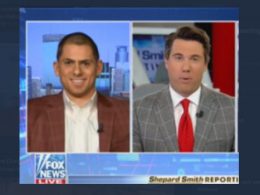 According to an unsealed indictment: Anton “Tony” Lazzaro, the founder of the GOP PAC Big Tent Republicans who…
byChris Dorsano
No comments