Nobody is sure why gunman Erick Javier Contreras decided to pick this particular house in his neighborhood to terrorize but the sufficiently armed homeowner let him know it was a huge mistake.

Things did not go as planned for Erick Javier Contreras, if the gunman even had a plan. Since it happened in the middle of the night in California, who knows what sort of chemistry was flowing through his brain?

The bizarre incident was caught on video. It happened in Hesperia on Monday, October 1 at around 3:30 in the morning.

Contreras thought all he had to do was blast a few rounds through the victim’s front door to get all the cooperation he needed.

Then, the 39-year-old gunman got a huge surprise when the equally armed homeowner blasted right back. Right through the same door.

It was Contreras pounding on his door in the early morning hours which woke up David Uresti and his wife. Someone outside was demanding to be let in.

Prepared for the worst

The surveillance camera set up next to the front door of the home clearly shows a wild eyed gunman “approaching the door of the Hesperia home and repeatedly kicking it.”

Before the first of the shots rang out, “Uresti had already prepared for the worst.” As soon as Contreras started attacking the door, the resident “retreated, got his own gun, hid his wife and child in a closet, and went back to the front door.”

As soon as he saw Contreras pointing his weapon at the door, the “shootout commenced with shots being fired by both the homeowner and the suspect, who were on opposite sides of the front door.”

The gunman is seen “shooting into the front door of the home as the homeowner returned fire from inside” for a full 45 seconds. For those who like to keep track, Contreras had a .22 while the prepared homeowner was packing a 9mm.

Realizing that he wasn’t going to be robbing this particular castle, the gunman decided to make a strategic withdrawal. “Contreras gave up and retreated, getting back into his vehicle and driving away.” Police found him. They say he “allegedly shot at another neighbor’s house amid his getaway.”

Once they had him in cuffs, everybody was surprised to learn “that Contreras was a neighbor of the victim, living only a few doors away.” The homeowner swears up and down he didn’t know the guy “or have any previous interactions with him.” 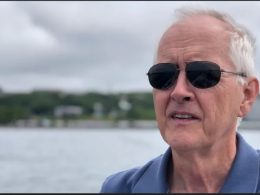