Congressional leaders are handing the National Guard a slap in the face for their hard work, then beating them senseless with looming financial headaches. They’ve been serving as the official Imperial Palace Guard since January but nobody wants to pay the bill for the “hundreds of millions of dollars” worth of Capitol Hill security service.

On Monday, July 12, Vermont Democrat Patrick Leahy, Chairman of the Senate Appropriations Committee, threw a measure on the table. He wants to spend $3.7 billion for “security upgrades to the congressional campus” and “bulk up Capitol Police training and equipment.” He also plans to cover “$521 million in unexpected Guard costs related to the four-month deployment to Capitol Hill” to make Democrats feel more secure from deplorable Trump supporters.

Republicans call that a slap in the face. The Guard should have been paid from a separate deal and paid long before now. Tying their paychecks to billions worth of progressive pork is an insult.

Democrats are hoping to extort Republicans into approving billions of dollars worth of over the top big-brother surveillance equipment to be used unconstitutionally against American citizens by tying the reimbursement for the National Guard special security details into the same bill.

Another slap in the face is that the Guard payments were in a previous spending bill which was only half the size of the one on the table now.

Under Leahy’s slap in the face scheme, a whopping $100 million would be shelled out to “Afghan refugees looking to leave the country as U.S. troops depart.” What does that have to do with Capitol Security?

Democrats are still terrified that deplorable Trump supporters will hold an insurrection but they aren’t willing to pay their private bodyguards. They would rather slap them instead. “A violent insurrection happened. A pandemic happened. And the president announced the withdrawal of American troops from Afghanistan,” Leahy said in a Senate floor speech on Monday.

“These events created urgent needs that must be met now.” When Imperial Leader Biden expected trouble at his swearing in ceremony, “nearly 26,000 National Guard troops were mobilized to provide security around Washington D.C.”

It isn’t like the individual guard members aren’t getting their paychecks but still they each get a personal slap in the face because their training sessions will have to be placed on hold.

Guard Members really look forward to that one weekend a month as a chance not only to learn new skills but have one heck of a party while they’re at it. Not this year.

The National Guard brass had to slap the troops down for a while.

“Guard leaders have said that without funding to reimburse those unexpected costs, they’ll be forced to curtail training in August and September to cover the financial shortfall.” Even House Republicans can offer little hope.

He is off the air!
byChris Dorsano
2 comments 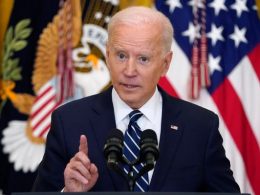