The FBI had Hunter Biden’s laptop since December of last year and they’ve been intentionally covering up the files it holds. To conservatives, things are starting to look a whole lot like alleged FBI director Christopher Wray is just as dirty and corrupt as his predecessor, James Comey.

Hunter Biden made a mistake which could prove fatal to his dad’s political career. It also could finally rip the lid off of the corruption everyone knows has been going on for decades at the Federal Bureau of Instigation. An apparently cracked-out Hunter dropped off a laptop for repair, then never went back to pick it up.

The files which it holds, that also appear to be authentic, detail a stunning pay-for-play scheme selling access to the Big Guy for heavy Ukrainian, Chinese, and Russian coin. The FBI has done nothing at all.

Contrary to his multiple public denials, Joe Biden knew all about it. Emails on the laptop prove that he was shaking Hunter down for half the take. Both Joe and his brother Jim were also desperate for Hunter to explain why he’s not allowed to be alone in the same room with one of his young female relatives.

Uncle Jim picked him up at the airport so they could talk privately on the ride back. If the FBI knows what was said, they don’t want to tell anyone. Not even the ones they are supposed to tell. Instead, they’re allegedly investigating it as a case of “Russian misinformation.” “Spare me,” Americans groan.

Senator Ron Johnson wants to know why the FBI is investigating Russia, not the Bidens. The chairman of the Committee on Homeland Security and Governmental Affairs demands answers, like whether or not the bureau is investigating the things found on the laptop or “chasing more Russian ghosts.”

Johnson put Christopher Wray on the spot and he’s demanding answers, calling on Wray to “confirm or deny details.” Wray is expected to plead the Fifth on top of a case of severe amnesia. 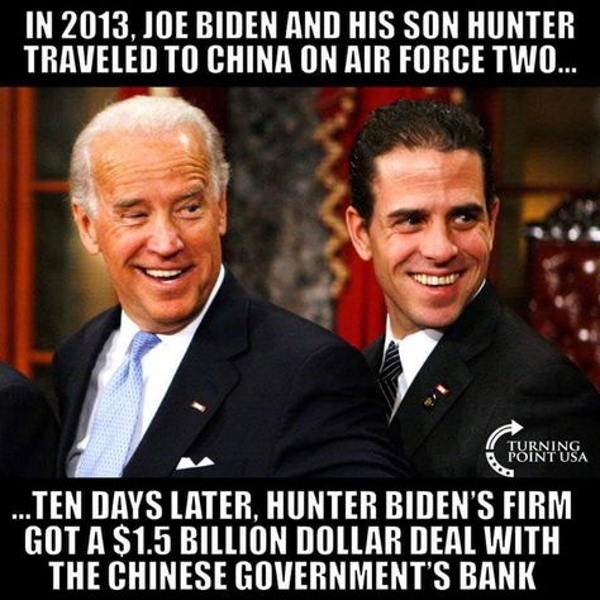 There wasn’t a word in the news

While the network press can speculate all they want about the weak chain of evidence, Johnson cleared up the confusion in his letter to Chris Wray. “A whistleblower contacted his committee on September 24, claiming to possess a laptop that Hunter Biden left at his business.”

The shopkeeper was complaining that he had turned it over to the FBI and here it was coming up on the election and there wasn’t a word in the news. He was worried that the Bidens might get away with it.

As soon as he heard that, Johnson hit the ceiling. He ordered his staff to get the FBI on the phone to “confirm certain details in order to validate the claim.” The bureau clammed up tight, declaring “they would not confirm or deny any of the information” allegedly contained on the laptop.

That’s not right and Johnson called them out on it. “Why did they sit on it? Are they covering up just because Hunter Biden might be engaged in things that also maybe should have been investigated and possibly prosecuted? Do we have two systems of justice: one for Democrats and one for Republicans? One for the well-connected versus one for the rest of the Americans?”

“The FBI has a duty to inform us. If they believe this was maybe Russian disinformation, they should give us a defensive briefing.” There’s no weaseling out of this one. “If, for example, they also believe that what information this whistleblower gave us is fraudulent, that would also be a crime, and FBI should tell us that.”

The FBI knows all about Hunter’s kinky and illegal shenanigans, they hold proof of an illegal pay-for-play influence peddling scheme run by a sitting vice president, on a laptop with a sticker that reads “Beau Biden Foundation,” and they’re investigating who made it public instead of the crimes it contains.