Police have identified the person who died after jumping off a condo balcony with a parachute as a 31-year-old Panama City Beach man. Spring Break 2021 is totally out of control in Florida.

Police said they believe Ackerman was BASE jumping, or jumping from a fixed spot using a parachute, but his parachute didn’t deploy.

“The Panama City Beach Police Department would like to remind everyone it is against the law to trespass and there is no legal place in Florida that allows BASE jumping,” police said in a release. The case remains under investigation.

Spring Break 2021 is out of control

As emergency spring break restrictions return to South Beach on Thursday, some residents are ready to hunker down in anticipation of another rowdy party weekend.

The 8 p.m. curfew in South Beach’s entertainment district and the 10 p.m. closures of the MacArthur and Venetian causeways will go back into effect Thursday night and expire Monday morning. The city plans to extend the orders each weekend until the end of spring break on April 12.

Both the party crowds, which have broken out into violence and vandalism this month, and the new restrictions will keep some residents home this weekend. Some refuse to leave Miami Beach after dark for fear of sitting in traffic for hours when they try to return home. Others who live near the South Beach party hub don’t want to be away from their homes when the curfew takes effect, sending crowds of jilted partiers into the residential Flamingo Park neighborhood.

“We are literally trapped,” said Cara Natkin, 57, a Flamingo Park resident. “There are no rules. All the rules have gone out the window.” 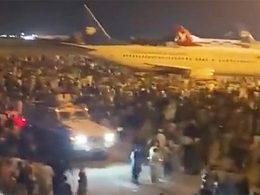 Terrifying Footage Emerges Out Of Afghanistan

After the Biden administration’s failed withdrawal, terrifying footage is now emerging from Afghanistan that shows the extent of…
byChris Dorsano
No comments

Everyone has been on the edge of their seat for a week, waiting to learn who won the…
byMark Megahan
No comments