Passenger Randy Davila was a tad impatient about getting off his flight at O’Hare airport. He did a lot more than unsnap his seatbelt before the captain turned the sign off. He opened up an emergency exit, walked out on the wing, slipped off and went on about his day. Until security grabbed him.

While the United Airlines flight was still taxiing up to the gate at O’Hare around 4:32 a.m. on Thursday, May 5, a 57-year-old passenger arriving from San Diego “pulled the emergency exit.” It didn’t take long before officers arrived on the scene to arrest him.

Randy Davila was charged with reckless conduct, a simple misdemeanor. At least O’Hare administrators were practical enough not to lock the whole terminal down. “Airport operations were not impacted by the incident.” A single unruly passenger isn’t cause to bring in the swat teams and bomb dogs.

United issued a statement to the press repeating the obvious and ducking responsibility. “This morning United flight 2478 was taxiing toward the gate at Chicago O’Hare when a passenger opened an aircraft door and exited the plane.” They don’t say how he was allowed to accomplish that but at least the ground crew was on the ball. “Our ground crew stopped the individual outside of the aircraft, and the person is now with law enforcement.”

Despite the unusual incident, the plane rolled safely up to the gate and every other passenger got off the plane in the normal manner. According to the Chicago Aviation Department, “The safety of our customers and crew is our highest priority.” No injuries were reported.

Local news outlets are reporting that Davila “attempted to guide the plane to the terminal.” Passenger Mary Ellen Eagelston relates that she thinks “everybody was kind of a little surprised and kind of doing, did we really see what we saw?” She made sure to take a pic of the emergency exit door for twitter.

One thing that O’Hare security is happy about is that he was caught sneaking off a plane rather than trying to get on one and at least he had a ticket. They have a huge problem there with serial stowaway Marilyn Hartman. She’s managed to become a frequent flyer passenger on flights all over the world without actually buying a ticket. Even with her picture plastered up all around the airport, she still managed to get on a plane not too long ago. She’s trying to break the habit. 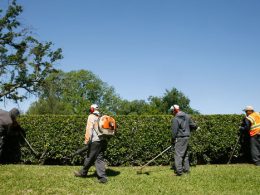 Along with abolishing the Trump guidelines regarding Title 42, Joe Biden plans to print up an extra 35,000…
byMark Megahan
No comments

He is off the air!
byChris Dorsano
11 comments

Joe Manchin Fires Back after White House Puts Him on Blast