As rioters continue to wreak havoc on cities across the county while the media refers to it as “peaceful protests,” a man defecated on the driveway of House Speaker Nancy Pelosi as called it a “peaceful protest.”

The man who goes by Mando is a prominent YouTube star told the New York Post that he mainly did it because his commenters kept asking for it and it was a “joke that got out of hand.”

He said that he is part of a niche YouTube community that creates “IRL” or “in real life” live stream videos.

The 28-year-old started his channel after he became homeless six years ago. It started a mission to show viewers what it’s like to live on the streets as he went from city to city.

His Saturday live stream video was titled, “Poopalosi” was started as a protest against the lack of resources for people living on the streets in California while elites such as Pelosi are able to take advantage of their power.

One main example being Pelosi going to a hair salon recently without a mask, all while coronavirus barred salons from being open and her herself demanding people be mandated to wear masks.

“I’d been hunting for a toilet all week, and the joke came up in the comments on one of my streams that ‘Hey, you should take a crap at Pelosi’s house,’” Mando told The Post.

“Everyone was enjoying the idea of it, and eventually I just couldn’t hold it anymore.”

Once Mando wandered the streets for a while, he was able to find the radical Democrat’s home and set up cameras in the driveway. He then squats on the pavement and relieves himself.

Pelosi lives in San Francisco which has been taken over by drug addicts and homeless people thanks to Democrat policies. Human feces and used needles are scattered around the streets of the city.

Mando says he isn’t political but is worried about the increasing crime that is occurring.

“I fear America is becoming one big burned-down city,” he said. 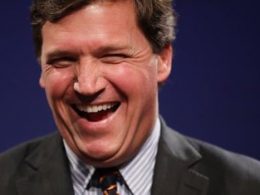 Tucker Deals A Heavy Blow to The NY Times

The Dems are scared of Bernie... again!
byChris Dorsano
No comments